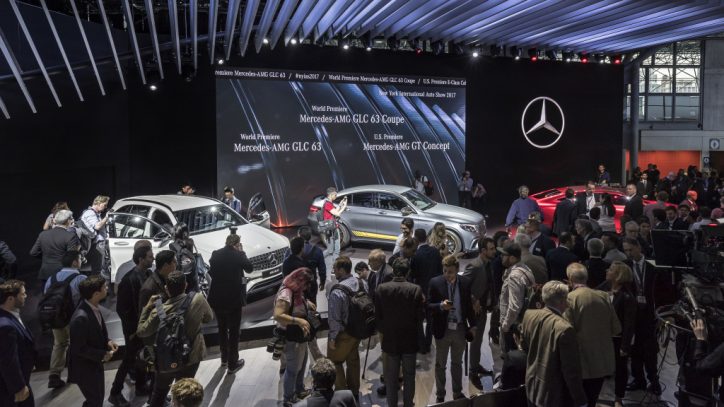 The star of Mercedes-Benz once again shined the brightest at the 2017 New York International Auto Show. The event saw two world premieres and two U.S. debuts of its cars.

The Mercedes-AMG GLC 63 4MATIC SUV and Coupe models are each equipped with a 4.0-liter biturbo V8 engine. The unit produces 476 hp.

The Mercedes-AMG GLC 63 S 4MATIC SUV and Coupe models each possesses the same twin-turbo V8 engine. However, the power of the S-trim is at 510 hp.

Then following the success of the brand from the 2017 Geneva Motor Show, it unleashed in the U.S. for the first time the Mercedes-Benz E-Class Cabriolet and the Mercedes-AMG GT Concept.

The Mercedes-Benz E-Class Cabriolet completes the lineup of its range for its current generation. The convertible basically mirrors the same technical specs of its coupe sibling, except its retractable roofing.

On the other hand, there is a lot to be excited about in the Mercedes-AMG GT Concept. According to Daimler, the four-door, hybrid version of its AMG GT can produce up to 816 hp and it has a zero to 100 km/h acceleration time of less than three seconds.

Photos of Mercedes-Benz at the 2017 New York Auto Show

Check out the gallery below showcasing the three-pointed star brand at the biggest annual car show in New York: