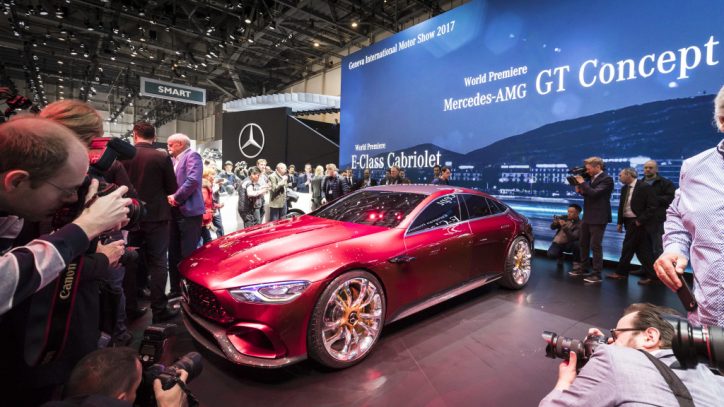 More photos of Mercedes-Benz at the on-going 2017 Geneva Motor Show are out. The images show the latest cars and sport utility vehicles of the brand. The star that shined the brightest during the event was the new Mercedes-AMG GT Concept.

Every vehicle of Mercedes in the show displayed unique traits that truly let each unit stand out. The most impressive from the bunch though was the Mercedes-AMG GT Concept, which was shown to the world for the first time.

Although the new concept car was already expected to come out sooner or later because of some hints given by AMG in the past, Mercedes really did a great job in avoiding an unintentional leak of the four-door car, unlike the G-Class landaulet that was spied previously without any camouflage before the Geneva Motor Show.

The Mercedes-AMG GT Concept rides on the same platform used by the Mercedes-AMG GT. However, the new concept possesses a four-door design and it integrates the “Aesthetics A” design language of Mercedes in its styling. The sports car has been classified by its maker as a four-door coupe and it carries with it a hybrid powertrain.

Photos of Mercedes in Geneva

Check out the official photos of Mercedes at the 87th annual Geneva International Motor Show in the gallery below: