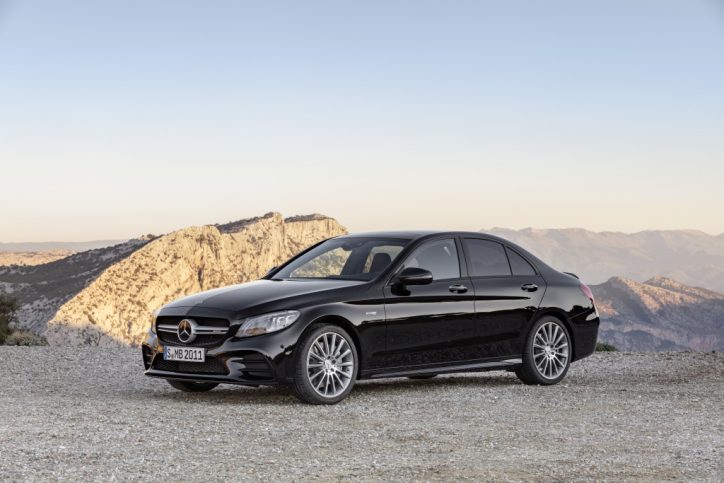 Majority of Mercedes-Benz fans right now have their full attention on the Mercedes-AMG GT 4-Door Coupe, but that’s not all the three-pointed star marque has in store for us at the 2018 Geneva Motor Show. Also hitting the event is the facelifted Mercedes-AMG C43 4MATIC saloon and estate.

Based on the press release and photos from Daimler, the Mercedes-AMG C43 saloon and estate models are getting subtle changes on the outside. The updates include a redesigned front bumper that incorporates new styling on the air inlets, twin-louvre grille, twin tailpipes, rear diffuser and bootlid spoiler. These are partnered to a choice of 18- or 19-inch signature light-alloy wheels of AMG, which are wrapped in performance tires.

Inside are the same level of detailing in the upholstery of the car carried from its previous model. The major upgrade comes in the onboard tech of the auto that includes the 10.25-inch screen with COMAND interface.

Under the Mercedes-AMG C43 4MATIC is the same 3.0-liter biturbo V6 engine. However, the power unit has been reconfigured to produce up to 390 hp and 383 lb-ft of torque going to all four wheels. The output is distributed via the AMG SPEEDSHIFT TCT 9G transmission.

The figures do not result to a faster zero to 62 mph acceleration though. The numbers remain at 4.7 seconds for the saloon and 4.8 seconds for the estate. On the other hand, the top speeds of the autos are still at 155 mph.

Check the official photos of the facelifted Mercedes-AMG C43 4MATIC in the gallery below: