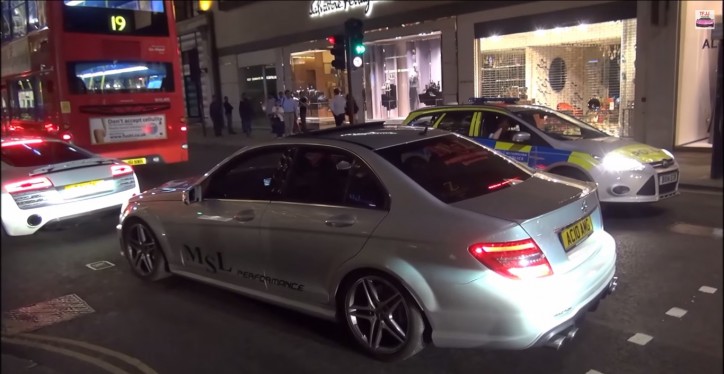 A Weistec Mercedes C63 AMG with thunderous engine noise was caught cruising along Sloane Street while setting off car and store alarms in its wake.

I was browsing in YouTube for some cool car videos recently when I came across one, which was uploaded by a user called TheTFJJ, about a really noisy Weistec Mercedes C63 AMG. The car was producing so much engine noise that it set off the alarm of nearby cars and stores around Sloane Street.

Also seen in the video was an Audi R8 trying to compete with the monstrous sound produced by the decatted C63 AMG. However, it should be noted that the Mercedes really stood out in the contest between the two cars.

There was a mixed reaction from the bystanders. Some sounded impressed while others were clearly annoyed with the ruckus the two performance cars were producing.

Later in the video, an agitated police officer could be seen approaching one of the cars. Well, no one could blame their reaction anyway since it seemed to be at an unholy hour already when the Mercedes and the Audi decided to go for a shouting contest.

Check out the roar of the Audi R8 and the thunderous boom of the Weistec Mercedes C63 AMG in the video below:

Specs of the Cars

According to the video description of the uploader, the Weistec-tuned Mercedes C63 AMG was carrying around 740 hp in its V8 engine. There was no information provided about the Audi R8 but it sure looked and sounded like the version carrying a V10 with around 525 hp.