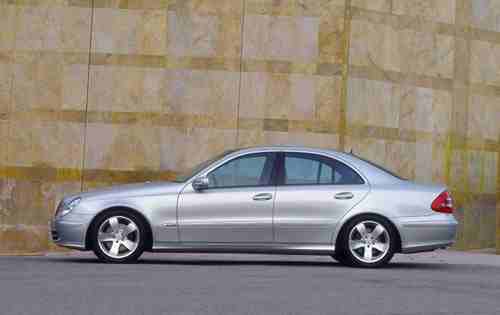 The 2003 Mercedes E-Class was among the models investigated by NHTSA over alleged fuel leaks.

The National Highway Traffic Safety Administration finally put a closure to an investigation it started in 2012 concerning some Mercedes-Benz E-Class cars. The three-year investigation, which ended last Tuesday, centered on the alleged fuel leaks affecting 281,000 units of the said range.

It should be recalled that the NHTSA started the investigation in January 2012 after it received around 20 complaints from owners of 2003 to 2006 Mercedes E55 AMG. Then, it later included in the probe the 2003 to 2008 E-Class models.

The complainants claimed that there was a strong odor emanating from both inside and outside of their vehicles. They added that the issue was particularly evident when they just filled up their fuel tanks. A number even stated the fuel would seep into their backseats.

The NHTSA closed the investigation after Mercedes told the agency in September that it would extend the original warranty of the affected models as well as the 2006 to 2011 models under the CLS-Class by up to 15 years. An unlimited mileage on “Covered Fuel Tank Components” was covered by the warranty extension too.

While the NHTSA confirmed that fuel tend to slip through the micro-cracks in the pressurized outlet fitting of the fuel filter/sender when its tank is full, it denied the possibility of the liquid to seep through the rear seats. The agency and Mercedes haven’t found any plausible explanation for the problem to occur. Furthermore, the NHTSA pointed out that the issue does not present an unreasonable risk to motor vehicle safety.