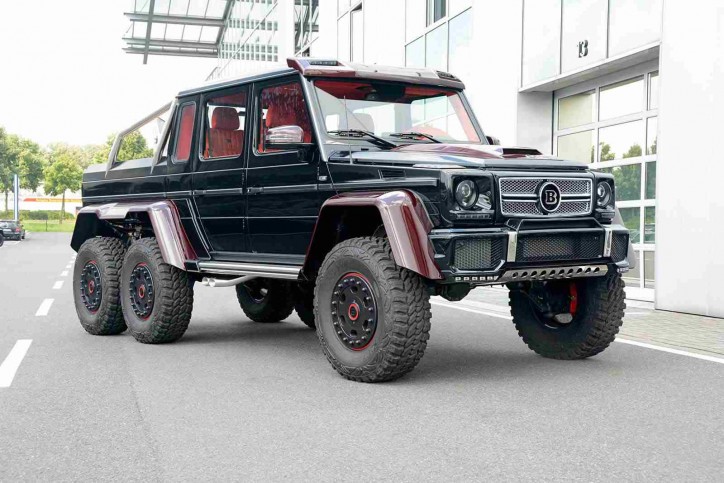 Brabus revealed its all-new tuning package for the Mercedes G63 AMG 6×6 after showing us its luscious kit for the red Mercedes S-Class. The latest kit of the three-pointed star’s favorite tuner is called the B63 S 700 6×6.

Similar to the previous car we featured, the Brabus-tuned Mercedes G63 AMG 6×6 sports red carbon fiber materials in its exterior. Among the areas of the auto that benefit from the red carbon treatment are the hood, roof, wheel arches, mirror caps, and the portion just above the windshield. It should be noted that the red carbon element complemented the black finish of the auto. Then, everything is topped off by a set of massive 32-inch off-road tires.

Going inside the G63 AMG 6×6, one can see the similar red and black combination of colors for its surfaces. However, the tuner reverses the theme so that red is the dominant color, and black is only used to highlight some of the cabin’s important features.

The aftermarket tuning package of Brabus is never complete without some tweaks in the performance of the vehicle it is working on. Given that, the 5.5-liter biturbo V8 engine of the Mercedes G63 AMG 6×6 is configured to provide an output of up to 700 hp and 960 Nm of torque.

The extra power enables the G63 AMG 6×6 to build an acceleration from zero to 100 km/h in only 7.4 seconds. On the other hand, its top speed is electronically limited to 160 km/h.

Based from the commemoration plaque of the vehicle, the customization of the behemoth has been commissioned by an automotive enthusiast with the name Badr Bin Saud who is probably a personality from the Middle East.