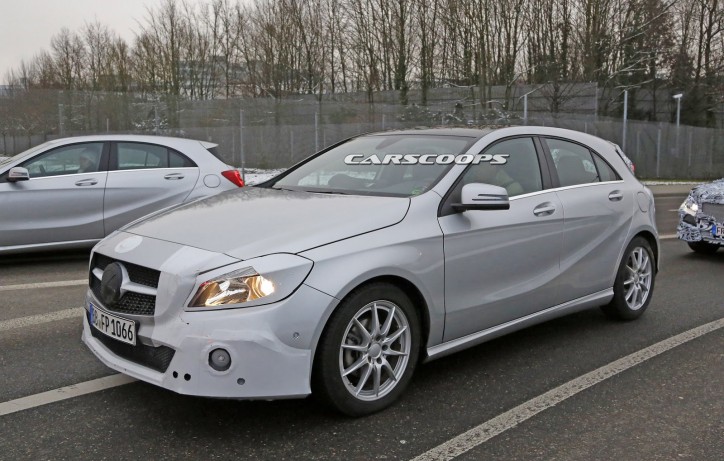 A spy photo of a 2016 Mercedes A-Class with facelift. (Photo Source: Carscoops)

Spy photos of the 2016 Mercedes-Benz A-Class with facelift have been discovered lately. Sad to say, the revisions on this one in its exterior components are only minor. Based on the camouflaged portions of the car in the spy shots, the updates in its design seem limited only to its bumpers, headlights, taillights and grille.

However, new images of the facelifted 2016 Mercedes A-Class revealed several key upgrades in its interior, particularly in its dashboard and control panels. First, it looks to have adopted the controls present in the GLA and CLA. The steering wheel appears new too. Carscoops mentioned as well that the infotainment system of the hatchback will receive the latest software used by the three-pointed star marque.

In addition, the subtle enhancements in the car’s exterior design would be compensated by its souped up engine. According to sources, all the variants in the A-Class lineup will receive a boost in power. Among them is the current AMG model’s 2.0-liter four-cylinder biturbo engine with 355 hp and 332 lb-ft of torque. Reports said its output will likely be raised to 375 hp.

In the interview of AMG chief Tobias Moers with Autocar, he stated they will make the A45 AMG the most powerful in its segment again. So, the 375 hp claims is definitely not far-fetched.

Exterior and Interior Photos of the Facelifted 2016 Mercedes A-Class

Check out the gallery below for more pictures of the 2016 Mercedes A-Class inside and out:

Tagged with: A-Class, A45 AMG, facelift