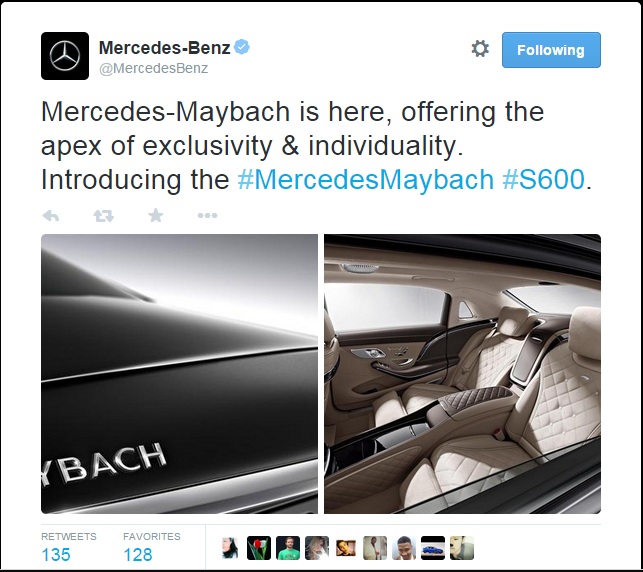 Mercedes-Benz teased photos of the Mercedes-Maybach S600 through Twitter.

Mercedes-Benz tweeted something that got everyone too excited just a while ago. That’s because its social media post contained two teaser images of the upcoming Mercedes-Maybach S600.

So far, only the lettering in the rear indicating the model name, and the elegant cabin design of the car were revealed by the Twitter post of the German automaker. However, it is great to see the Maybach name resurrected in a new car under the three-pointed star marque.

It should be noted that the Maybach brand was scrapped in 2012. Since then, it opened up a void in the ultra-luxury segment of Daimler. After quite some time though, it was announced that the name will be revived but it will no longer be a stand-alone range. Instead, it will be merely a sub-variant of the S-Class range. Despite that, it is still a nice addition to the magnificent vehicles of the iconic Mercedes luxury brand.

Based on information gathered from Mercedes, spy photos and videos, plus several other sources, the car will heavily borrow the styling of the S-Class. One can also observe that it carries some styling cues found on the Maybach 62 model.

Some photos of the car were published by Autoweek earlier too, which can be seen below. From the set of photos, the car does indeed appear to carry a lot of similarities with the last vehicle produced under the Maybach brand.

Mercedes-Benz teased photos of the Mercedes-Maybach S600 through Twitter.

The new ultra-luxury car of Mercedes will premiere at the Los Angeles Auto Show next week. More details will be provided about the car as information becomes available leading to the event.