Recently, the upcoming Mercedes S-Class Maybach was spotted again while it was making its rounds in the Nurburgring endurance track. YouTube user TouriClips uploaded a video of the actual testing, which can be watched below:

What gave the car away as a Maybach was its noticeable longer wheelbase. Then, the wider C-Pillar revealed that the car has more leg-room in its rear cabin.

While the current S-Class already allows a nice stretching room for its passengers, comparing the upcoming Maybach with the earlier variants dwarfs them in size. Some narrow turns in the track even appeared to barely fit the overall length of the car.

Despite the longer size of the Mercedes S-Class Maybach, it looked great in terms of handling and performance. The two factors were not compromised by its length. The car was able to navigate and maneuver itself in the ring without much trouble at all while maintaining its quick pace.

If you think this is already long, wait until the Mercedes S-Class Pullman comes out. The Pullman sits above the Maybach line and it carries two pairs of twin seats in the rear, plus the two seats in front that accommodates the driver and front passenger. This is way longer than the Maybach and it will make the standard S-Class sedan shy away from it. 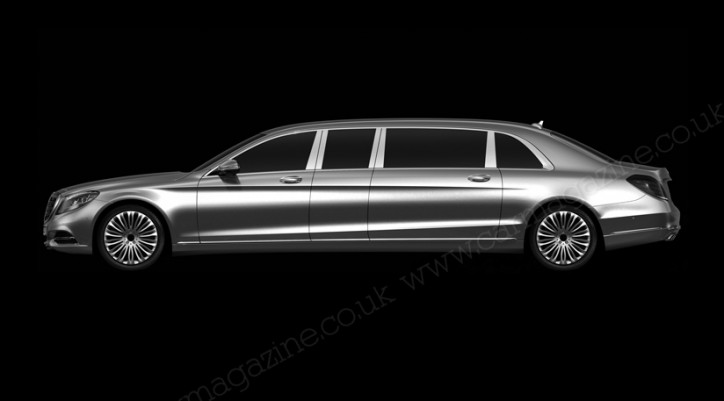 The design of the Mercedes S-Class Pullman, which was submitted to EPO.

Based from several sources online, the Maybach version of the current S-Class range will carry a more powerful engine with higher horsepower and torque in order to accommodate its larger frame. Rumors have it that the new Maybach will debut sometime in November either at the Guangzhou Auto Show or LA Auto Show.