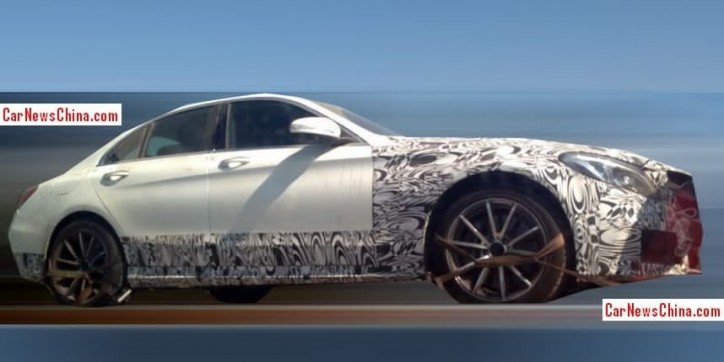 The 2015 Mercedes-Benz C63 AMG is scheduled to make its Chinese debut at the Guangzhou Auto Show in November. (Photo Source: Car News China)

A few hours ago, another set of spy photos of the upcoming 2015 Mercedes-Benz C63 AMG surfaced. The photos were posted through Car News China.

According to the source, the car was spied while being hauled by a flatbed truck in China. However, it is noticeable in the photos that the background of the car was blurred out to give highlight only to the subject of the picture.

Noticeable from the photos are the car’s twin-exhausts, performance wheels, and redefined wings. The new C-Class version will be powered by a biturbo 4.0-liter V8 engine. It has an output of around 450 hp. The power comes from the rear wheels, and it is distributed through the vehicle’s seven-speed Speedshift automatic gearbox.

The 2015 Mercedes C63 AMG is scheduled to debut at the Paris Auto Show in September while its debut in China is scheduled in November at the Guangzhou Auto Show.

Currently, the U.S. is the largest market of Mercedes-Benz based on the recent interview of Steve Cannon. But as of late, China is catching up. He said that his company envisions the PRC to surpass the Mercedes market in the U.S. by 2015.

As a result, Mercedes-Benz USA is presently competing for the allocation of its cars against its Asian counterpart, which makes some of their supplies tight, particularly the GLA and CLA. We have also noticed that some of the best cars of the three-pointed star brand have been heading to China.