The coming Caravan Salon 2018 happening on August 25 in Düsseldorf, Germany, will showcase the new Concept Marco Polo. Compared with the previous versions of the camper van, the concept is fitted with smart and advanced connectivity features.

According to Mercedes, the Concept Marco Polo is based on the new Mercedes-Benz Sprinter. It is scheduled to hit dealerships next year.

The key highlight of the van is the new interface module called the “Mercedes-Benz Advanced Control” or MBAC. Similar to one of the key functions offered by the MBUX, the MBAC allows the driver to configure the settings of the auto through voice commands. These include controls for the air suspension, lights, and pop-up roof, among others.

Expect the new camper concept vehicle to carry the standard equipment found in the current Mercedes-Benz Marco Polo units. As a recap, the recreational van includes two large beds, foldable middle and third-row seats that transform into beds, tables, window curtains, rear metal racks, pull-out awning, and pop-up roof. These can be further customized depending on your budget.

Outside, the raisable roof, rear metal rack, and special paint featuring either white and blue-green combination or black and white finish with hexagonal designs distinguish the Concept Marco Polo from the standard Sprinter.

What’s more, Mercedes will demonstrate the Sprinter Connected Home during the event. It shows how the settings of the Concept Marco Polo with MBAC can also be operated using a smartphone.

The Mercedes-Benz Concept Sprinter F-Cell will be hitting the show as well. Similar to the Mercedes-Benz GLC F-Cell, the camper van has a plug-in hybrid powertrain with hydrogen fuel tanks and a rechargeable battery pack.

The auto has an output of 147 hp and 258 lb-ft of torque. The maximum range of the van operating only on hydrogen fuel cells is 530 km/h while operating on the battery pack alone pushes it to 30 km. 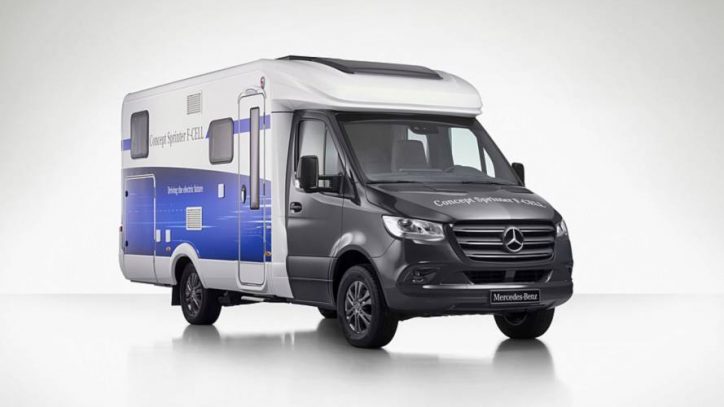