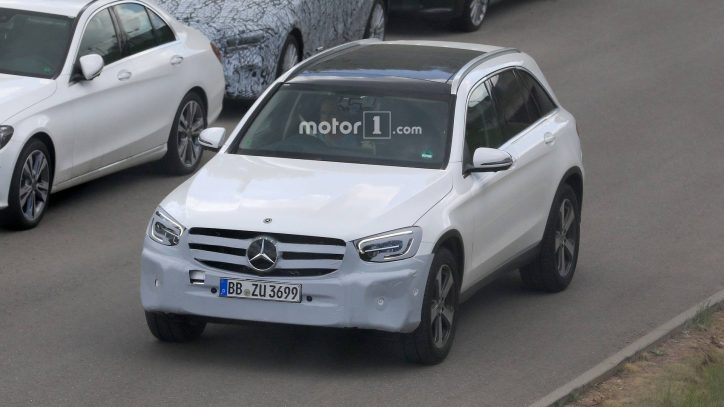 Spy photographers have captured what appears to be a new model of the Mercedes-Benz GLC. The images hint that the sport utility vehicle is about to receive a mid-cycle refresh.

The GLC is one of the most in demand SUVs of Mercedes. Based on the numbers of MBUSA, they have sold 48,643 units of the range last year. However, we haven’t seen major changes in the vehicle since it came out. With the developments seen in the spy shots of Motor1, the updated version of the auto might be revealed sometime next year bearing a 2020 model year.

As we have been accustomed to, the changes in spied autos are often masked by camouflage wraps. In this case, the pearly white GLC had its front bumper, front grille, and headlamps partially covered. Therefore, it is expected that the upcoming model of the SUV will only offer subtle updates on its fascia while the headlights will carry the tech found in the lighting of the Mercedes-Benz C-Class.

It should be noted that the GLC shown in the pictures are still under development. So, there is a huge possibility that these do not reflect the product that will be made available to customers in the future. Mercedes will probably apply some updates in the taillights of the auto to complement the upgrades in its front lights. Again, these will likely get the same tech found in the C-Class sedan. We might see a resculpted rear bumper, too.

The spy shots take a peek at the facelifted GLC’s interior as well. From the looks of it, the upcoming model will feature a larger display in its instrument cluster, and new design for the steering wheel complete with new layout for its extra set of buttons for the controls.

The powertrains in the latest C-Class will likely trickle down to the facelifted GLC. The base trim of the SUV is expected to get a 2.0-liter inline-four with a bump in its output from 241 hp to 255 hp.

Check out the new spy shots of the facelifted Mercedes-Benz GLC in the gallery below: