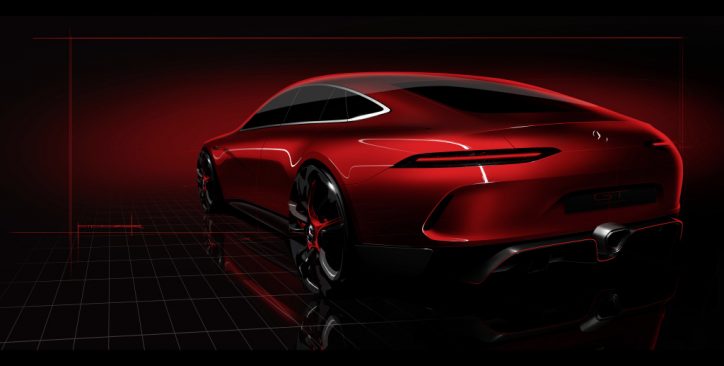 A teaser image of the four-door Mercedes-AMG GT Concept.

Daimler just confirmed the existence of the four-door Mercedes-AMG GT Concept. The parent company of Mercedes-Benz said through its Global Media Site stated that the car will be unveiled at the 2017 Geneva Motor Show, which is happening this week.

Quoting the Stuttgart-based company’s press release, it only said, “With the Mercedes-AMG GT Concept, the performance brand offers an advance view of its four-door sports car at the Geneva Motor Show.”

So far, that’s the only information we have about it. We will be covering the event as it happens to learn more about the vehicle. So watch out for updates.

Basing on rumors and insider info, the upcoming AMG four-door sports car will feature most of the styling elements present in the current Mercedes-AMG GT, except of course its sibling’s two-door layout.

Then instead of its body line-rich body, the four-door GT might adopt the upcoming styling language of Mercedes called the “Aesthetics A“. The new design language offers a smoother exterior with sweeping angles that reflect an artistic play of light and shadow present in its environment.

The car will likely possess the new 4.0-liter biturbo V8 engine of Mercedes. The power unit will possibly come in two configurations with the S model having more in terms of output.

The four-door Mercedes-AMG GT is being groomed to rival the Porsche Panamera, Audi A7 and BMW X6 GranCoupe when it arrives in the market.