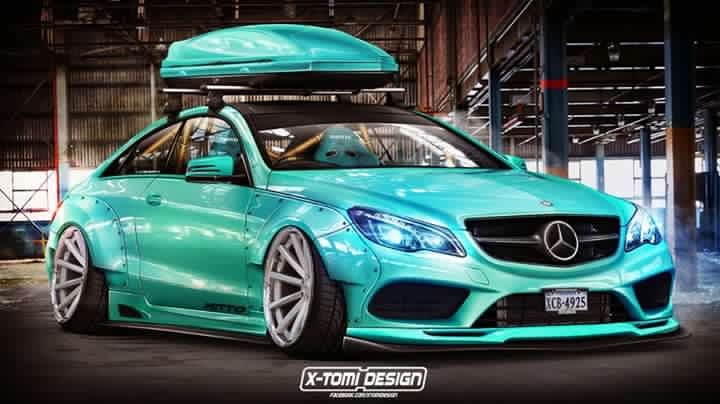 X-Tomi Design & Photo recently made a rendering of a customized Mercedes E-Class Coupe. It was certainly awesome except for one feature.

The artist called it the Liberty Walk Mercedes E-Coupe. As indicated by the name, the inspiration for this artwork came from the masterpieces of LB Performance.

This particular Mercedes features a more aggressive stance compared to its performance model from AMG. Its suspension has been lowered and it was fitted with a new front bumper that integrates a very prominent lip spoiler. Then its fenders have been extended and equipped with a wider wheel and tyre combination to give the car a very muscular appeal.

Among the noticeable changes were also the side skirts that similarly offer a broader shape, almost resembling wings in its base. Moreover, the roof has been blacked out to offer a contrasting look.

Most of the enhancements were made from carbon fiber materials to make the vehicle more agile. It is presumed, after reviewing the other works of LB Performance, that the car here has new rear diffuser housing a set of sporty quadruple tipped tailpipes.

However, the rack and cargo box mounted on the roof of the E-Class Coupe both appear to be a bit out of place. The two somehow ruin the sexy contour of the car. Not to mention that the box messes up the aero design of the auto.

In addition, the car would have benefited more from the installation of a wide rear wing similar to the other cars with LB Performance’s body kit.