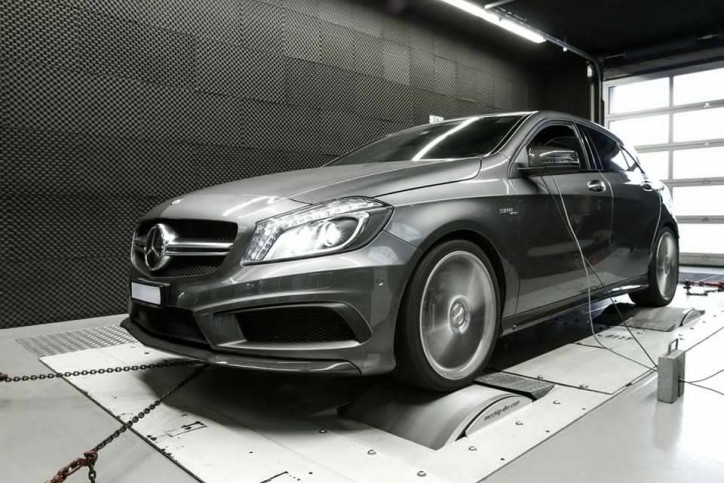 McChip tunes the Mercedes A45 AMG to further raise its engine output and top speed.

The Mercedes A45 AMG already packs quite a kick in its 2.0-liter four cylinder turbo engine. To be exact, the output of this compact car goes up to 360 hp and 450 Nm of torque.

Mercedes-Benz boasts that the AMG engine of this auto is considered to be the most powerful in the four-cylinder line. The mentioned figures, along with the other goodies present in the car like its seven-speed dual-clutch automatic transmission gearbox, enable it to achieve an acceleration of zero to 100 km/h in only 4.6 seconds with an electronically-limited top speed of 270 km/h.

Seeing more room to push the Mercedes A45 AMG further to its limit, McChip tinkered with its ECU to give it more boost in power. The result was a breathtaking 445 hp and 540 Nm of torque. While the acceleration figures weren’t provided, what we know so far is that the hatchback can now run up to 300 km/h.

According to Motorward, the tuner achieved the feat by removing the ECU of the A45 AMG. Then, they flashed it, and uploaded their own software to it. Their software altered the timing, ignition parameters, and turbo boost of the hatchback. After that, they placed it back into the car, and went on to work with its exhaust system.

Check out the other photos of the McChip-tuned Mercedes A45 AMG below: