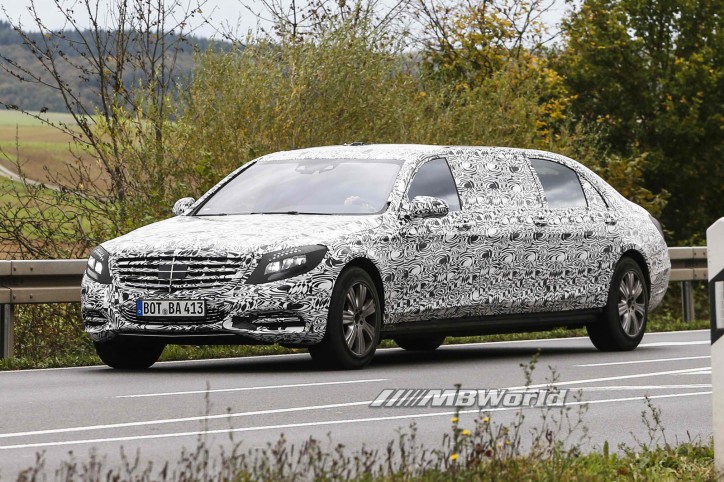 The spy photos of the Mercedes-Benz S-Class Pullman have finally emerged. Thanks to MBWorld, we now have a slight idea of what we can expect from the ultra-luxurious and extra-long sub-variant of the three-pointed star’s S-Class range.

Check out the spy photos of the Mercedes-Benz S-Class Pullman below, which were provided by MBWorld:

The makers of this limousine really made quite an effort to conceal its features as every portion of it was wrapped in camouflage. However, looking at the vehicle’s proportions and comparing them with what Mercedes-Benz has revealed to us so far about its extra-stretched S-Class variant, we are sure that the limousine is the S600 Pullman.

It seems like there was a little revision with the middle pillars of the car though compared with what were shown to us in its rendered pictures. Despite that, the improvements really enhanced the style and balanced the proportions of the vehicle.

Presently, it is too early for Mercedes to disclose more details about its limousine, particularly its engine specifications. But earlier sources speculate that it might come with a 6.0-liter V12 biturbo engine with an output likely around the 523 bhp and 612 lb-ft of torque range. It should be similar to the S600 but expect a little lag in the limousine’s acceleration compared to its smaller counterpart due to its extra weight.

It is also rumored that the extra high-end Mercedes-Benz S-Class Pullman will have a million dollar price tag. Sources say it is expected to fetch around $1.16 million. It should be added that the car is Mercedes’ answer to the ultra-luxury autos of brands like Bentley and Rolls-Royce.