Mercedes to Test Its Solution to the Exhaust Noise Issue

Formula One underwent a new stage of evolution this season with the implementation of new engine rules and other modifications in its set of standards. While this has been seen as a major improvement in the history of the sport, fans and the higher ups of F1 like Bernie Ecclestone have shown their dismay with the resulting noises of the new engines. According to the F1 President and CEO, he was “horrified” by the lack of noise from the race cars.

So, in order to please the F1 community, and probably the F1 boss, it was recently revealed by Mercedes that it is working on a solution to address the issue. The tweet of Mercedes regarding the matter can be seen in the screenshot below: 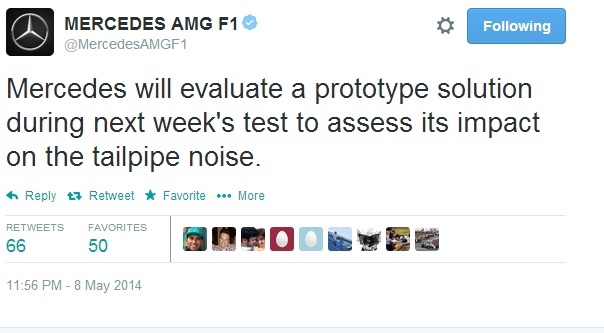 Mercedes revealed through a tweet that it is working on a prototype solution that will address the complaints of the F1 community regarding the lack of exhaust noise in the race cars.

As of now, there have been mixed reactions pertaining the exhaust noise issue. Half of them said that the complaints were absurd while others argued that the car noise has been a crucial element in building up excitement in F1 races.

Our Take on the Exhaust Noise Issue

We at BenzInsider don’t care much of the engine noise. Being die-hard fans of team Mercedes, what really matters is how they perform in the season. Let’s all hope that they bag the world championship this time.

Tagged with: Bernie Ecclestone, Formula One