SEND US A TIP
C-Class, Featured
2

Mercedes-Benz is known for secrecy in their design and engineering department, but details and photos are emerging that indicate they plan to release a sporty, aggressive C-Class in 2014 or 2015 that will be able to compete with the BMW M series.

Mercedes has long eyed the world of “sports saloon” cars with an eye towards entering the market, but thus far they have been unable to outsell the famous BMWs. Photos and data from test runs at the Nürburgring indicate that Mercedes intends to come into 2014 with a car that outperforms the M series in both top speed and handling while integrating much of the AMG power and performance as standard. 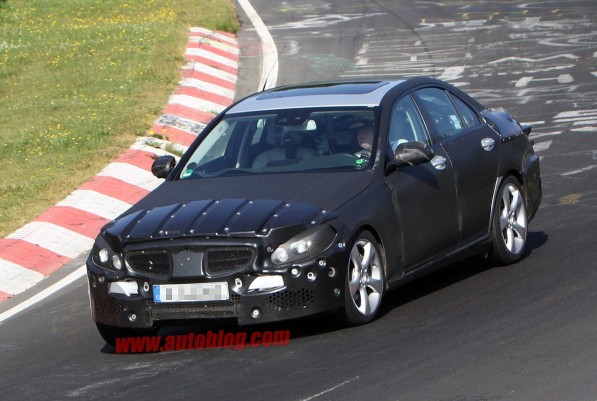 Although details are sketchy, photos and reports of the test car being driven at the Nürburgring indicate that a strong emphasis has been placed on handling – something that the Nürburgring tests above almost all other famous racing tracks.

The Nürburgring’s tight turns and general lack of flat open terrain forces cars to have both horsepower and grip, and the next C-class appears to have lots of both. Body panel designs and other integrations indicate that it will be taking much of the technology developed for the Mercedes SLK, a dedicated racing vehicle. However it is definitely much more convenient and practical, and no doubt will have luxury car price and performance as opposed to the outlandish supercar pricing and power of the SLK.

What we do know for certain is that it is a front-engined, all-wheel drive vehicle with a full front and back seat. It’s blisteringly fast – clocking in at no less than 150mph on the straights, it has the aggressive speed that Mercedes is known for.

It also appears to be surprisingly fuel efficient. Observers claim that, instead of the thirsty V6 of the M-class, this new C-class will have a high efficiency turbocharged four cylinder engine. There also appears to be plans to produce a diesel-electric hybrid, similar to the LeMans cars that BMW and Mercedes put forth in recent years. The goal of this new car seems to be to be to offer power and performance similar to an M-series while being more practical. Expect to see it at an auto show in early 2013!