SEND US A TIP
Company
10 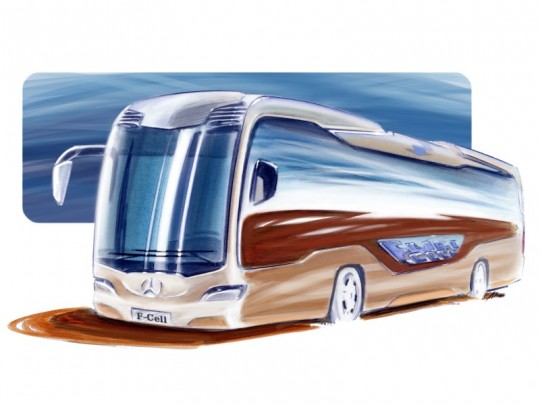 Buses made by Mercedes-Benz are headed straight for a clean future: This June, Mercedes-Benz Buses will present the new Citaro FuelCELL Hybrid model, the brand’s first fuel-cell hybrid bus. The regular-service city bus marks yet another important milestone on the road to zero-emission mobility and improved resource conservation within the framework of Daimler’s “Shaping Future Transportation” global initiative.

Linear development from NEBUS to the Citaro FuelCELL Hybrid

Daimler Buses has been proceeding in a linear fashion down this road, which began in 1997 with the NEBUS research vehicle – the world’s first bus to be equipped with a fuel-cell drive system. Daimler then moved ahead with the fuel cell Citaro, the Citaro G BlueTec Hybrid equipped with a diesel-electric hybrid drive system, and now the new Citaro FuelCELL Hybrid for 2009.

The Citaro FuelCELL Hybrid isn’t a futuristic study – it is already a reality, which is why Mercedes-Benz Buses will soon be extensively monitoring its performance in normal operations within the framework of a major fleet test in several European cities. This test series will proceed along the lines of the successful CUTE fleet test conducted by the European Union between 2003 und 2006. Since 2003, a total of 36 Mercedes-Benz Citaro buses equipped with fuel cell drives have performed outstandingly at 12 public transport agencies on three continents as part of the CUTE test, its HyFLEET:CUTE follow-up project, and other related testing programs. The buses were driven a combined total of more than two million kilometers in a total of approximately 135,000 hours of operation. Their availability – between 90 and 95 percent – impressively demonstrated the environmentally friendly fuel-cell drive’s suitability for everyday use in urban regular-service buses.

The new Mercedes-Benz Citaro FuelCELL Hybrid draws upon the experience gained with the outstanding performance of the aforementioned 36 fuel cell buses. CUTE focused on the suitability of the fuel cell drive, however. The Citaro’s diesel engine was therefore replaced by a fuel cell drive in order to ensure the highest possible level of stability for the bus. The associated compromises did not have to be made with the new Citaro FuelCELL Hybrid, since its drive system technology is a completely new development that also utilizes key elements of the Citaro G BlueTec Hybrid. Shared components here include axles fitted with electric hub motors, lithium-ion batteries to store energy, and all electrically powered ancillary components.

The Citaro FuelCELL Hybrid is based on the proven platform for the top-selling Mercedes-Benz Citaro city bus. The new model’s fuel cells are powered by hydrogen, whereby hydrogen consumption in the Citaro FuelCELL Hybrid will be much lower than in previous fuel cell buses, thanks to a hybrid drive with a sophisticated drive system control unit. The model thus offers major benefits in terms of resource conservation and reduction of emissions associated with producing the required hydrogen.
Completely exhaust-free and virtually silent in the city

An exceptional feature of the Citaro FuelCELL Hybrid is its outstanding environmental friendliness in normal operations. The bus emits absolutely no pollutants while in motion, and is also virtually silent. This makes it particularly ideal for use in highly congested inner cities and metropolitan areas. The Citaro FuelCELL Hybrid is thus the next logical step on the path to zero-emission public transport, which Daimler had already announced it would take, and it will thus play a major role in future mobility systems.

The innovative bus model also underscores Mercedes-Benz’ and Daimler Buses’ leadership in drive system technologies. The engineers who developed the fuel-cell hybrid bus were able to call upon the Group’s tremendous expertise in the field of alternative drive systems. The fuel cell systems used, for example, are identical to those installed in the Mercedes-Benz B-Class F-CELL passenger car, for which small-lot production will begin later this year. Several components were also borrowed from other innovative models, with developers mutually benefiting from their respective test results. The new Mercedes-Benz Citaro FuelCELL Hybrid will celebrate its premiere at the beginning of June at the UITP World Congress and Mobility & City Transport Exhibition in Vienna.