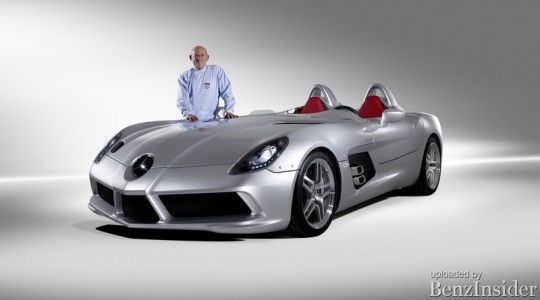 The new SLR Stirling Moss is characterised by the most sophisticated technology and a breathtaking design which reinterprets the SLR legend. With 478 kW/650 hp the SLR Stirling Moss accelerates its V8 supercharged engine from standstill to 100 km/h in less than 3.5 seconds, and has a top speed of 350 km/h – no other series-production car is at the same time so open and so fast.

This extreme concept makes the new high-performance sports car a legitimate bearer of the name of the British motor racing legend and Mille Miglia record-holder Stirling Moss, who drove the legendary Mercedes-Benz SLR racing cars from victory to victory in 1955. The exclusive SLR Stirling Moss rounds off the current SLR family and is limited to 75 units. It is priced at 750,000 euros (excl. VAT). The SLR Roadster will cease to be manufactured at the end of May 2009 as planned, and production of the SLR Stirling Moss will commence in June 2009.

Check out the entire gallery