Daimler Buses achieves best sales results in its history in 2008 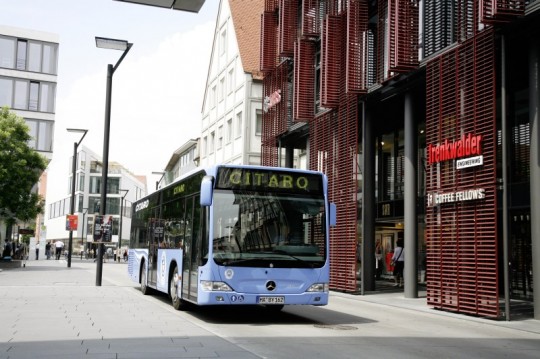 In 2008 Daimler Buses achieved the best-ever sales result in its history. The unit sold a total of 40,600 buses and chassis of the Mercedes-Benz, Setra, and Orion brands worldwide, an increase of 4% on the previous record, which was set in 2007. What’s more, sales in Europe of Mercedes-Benz minibuses based on the Sprinter rose by 18% to 1,100 units. I guess not everything is being affected by the economic crisis.

Daimler Buses posted the best business results in its history, with revenues rising by 11% to around €4.8 billion (2007: €4.35 billion) and EBIT increasing by over 30% to €406 million (2007: €308 million). Daimler Buses also boosted its return on sales to 8.4% (2007: 7.1%), making it the most profitable company by far in the bus industry.
Hartmut Schick, Head of Daimler Buses: “With this, we tripled the amount of contribution over number of sales, which means we are growing in the areas where it pays off.”

Daimler Buses also defended its market leadership, recording a worldwide market share of 15%. Moreover, it also maintained its leadership in key markets such as Germany, Turkey, Mexico, and Latin America, and even substantially expanded its market share in some countries. Hartmut Schick, Leiter Daimler Buses: “We are excellently positioned worldwide, with very high market shares of more than 50% in some cases. Our international scope and global system of cooperation are strengths that we have built up over a period of several decades and will retain in the future.”

Schick had the following to say about the results of the past business year: “All in all, 2008 was a very good year – in fact, it was the best year in our history. We therefore have a very good and stable foundation for 2009.”

In 2008, Daimler Buses once again had very successful products, with the Setra S 415 NF low-floor bus being named “Bus of the Year 2009.” Another product, the Mercedes-Benz Travego, became the world’s first travel coach to feature the Active Brake Assist safety system, which helps prevent rear-end collisions. Daimler Buses is also the world market leader for hybrid buses, with approximately 1,700 Orion VII Hybrid buses in metropolises all over North America. Furthermore, the business unit has globally revamped a lot of models. “We are continuing to focus on innovative products, top-class service, and the highest levels of quality and safety,” said Schick. “That’s our all-around package for satisfied customers.”

This sustained success is made possible through Daimler Buses’ strategy, which encompasses the four core objectives of Operational Excellence/Efficiency, Growth in Existing Markets, Growth in New Markets, and Technological Leadership. “We are continuously working on improving our core processes, cost structures, and sales strategy,” says Schick. “This means, for example, that we are making our European production network even more flexible and doing all we can to fulfill our customers’ wishes with even greater precision and customization.”

One important component of the unit’s strategy is the Beyond Bus Plus (BBP) efficiency-boosting program that was introduced in 2008. BBP encompasses several fields of action, such as improving cash flow management and net assets, optimizing processes, adjusting the organization to market and customer requirements, and boosting market shares by means of sales campaigns at Mercedes-Benz and Setra. Schick explains the relevance of the various programs and measures as follows: “Our growth and efficiency programs have ensured the success of our business unit in the past, and we will continue along this path with Beyond Bus Plus.”
In order to achieve further growth in established markets such as Europe, the U.S., and Mexico, Daimler Buses will introduce new models, improve fuel efficiency, and reduce emissions.

However, Daimler Buses’ strategic goal is to expand beyond the existing markets and benefit from the high growth potential of rising markets such as Russia, India and China. To this end, Daimler Buses formed a joint venture with the Indian bus manufacturer Sutlej in September 2008. In addition, travel coaches from Daimler Buses are already being tested by customers in the country, and the business unit is expanding its sales and aftersales organization on the Indian subcontinent. In Russia, Daimler Buses and Daimler Trucks have formed a strategic partnership with Kamaz, the country’s largest truck manufacturer. In the Chinese market, meanwhile, the focus is on expanding the business with licensed products.

To enable it to exploit new growth opportunities, Daimler Buses is also employing Bus Rapid Transit (BRT) solutions, which provide an example of how regions with strong population growth and crowded cities can implement an intelligent transport system that has a big impact despite the low amount of effort and expense it involves.
For its fourth strategic pillar, Technological Leadership, Daimler Buses is concentrating, on the one hand, on improving the environmental friendliness of conventional drive systems, particularly when it comes to fulfilling the future Euro 6 emissions limit. On the other hand, it is also focusing on developing alternative drives, with the goal of eventually generating zero emissions. The challenge here is that economy, low lifecycle costs, and sustainability are dependent on one another rather than contradictory. Thanks to its Orion VII Hybrid bus, Daimler Buses is the global leader when it comes to hybrid buses. Another hybrid vehicle, the Mercedes-Benz Citaro G BlueTec Hybrid city bus, is currently undergoing winter trials and will commence customer testing later in the year. A big step toward zero-emission mobility is the second-generation fuel cell hybrid bus, which is also based on the Mercedes-Benz Citaro city bus.

“We are making huge investments in order to remain the technology leader when it comes to environmentally friendly drive systems, safety, reliability, and comfort,” says Schick.

Daimler Buses is confident that it has initiated an effective set of measures for improving efficiency. It will enable Daimler Buses at least to partially offset negative market influences this year. Hartmut Schick: “However, it is also clear that we are not operating in a protected economic zone. The recession is affecting us as well. Because of global changes in economic conditions, we will be unable to achieve the same sales level this year as we did in 2008.”

In Europe, the world’s largest bus-manufacturer expects that the financial and economic crisis will especially affect the travel coach sector, whereas the market for city buses will probably remain more or less stable. In Mexico, Turkey, and South America more difficult refinancing conditions could reduce demand. Although the market has weakened in the U.S., Daimler Buses will ensure that business remains brisk due to its big order backlog there.

Hartmut Schick: “2009 will certainly not be another record-breaking year. Our main priority this year will be to further extend the relative lead we have on our competitors. There is still no need for us to fear any comparisons.”

Overall, Schick looks ahead positively: “Our customers are first in all our activities. We have the resources, products, outstanding service, and most of all the right team-spirit. This is why we remain world market leader in 2009 and keep expanding our position.”