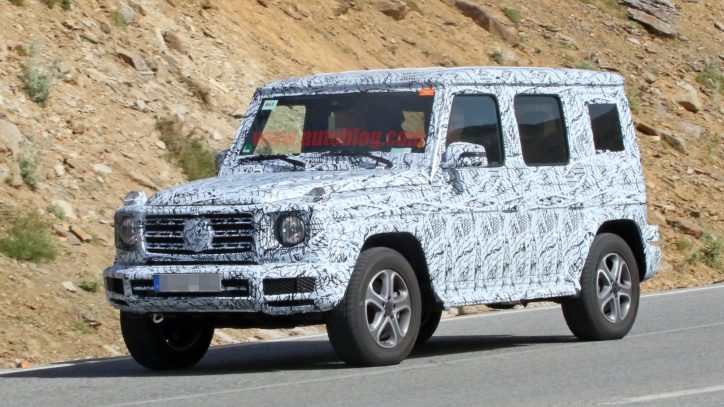 A spy shot of a fully-camouflaged next model Mercedes-Benz G-Class. (Photo Source: Autoblog)

The Mercedes-Benz G-Class has been in production since 1979, which makes it the longest existing SUV range of its brand. Recently, a new model of it was spotted in full camouflage while undergoing testing.

Based on the spy photos of the new G-Class, the auto still carries its signature classic and boxy design. Well, for an SUV that is still popular and in demand despite having been in existence for almost 40 years, Mercedes appears to be very careful in introducing changes to it that may destroy its reputation with both potential customers and fans.

However, the source claimed the coming G-Class appears to be wider than the current one. The report said the new model also shed some weight. The materials used for its body is supposed to let it lose nearly 900 lbs compared to the existing version of the SUV. Moreover, it is expected to have an improved suspension.

It is speculated that the AMG model of the next G-Class will carry a 4.0-liter biturbo V8 engine. While no official details or hints have been released by its maker yet, the Mercedes-AMG G-Class power unit might be able to produce as much as 563 hp or 603 hp similar to the next Mercedes-AMG E63 sedan.

Lastly, the article stated that the Mercedes G-Class will be built in Austria much like its predecessors.

Check out the spy pictures of the upcoming Mercedes-Benz G-Class in the gallery below: