SEND US A TIP
Featured, M-Class
0

Two Mercedes ML-Class Variants Will Be Available This Year 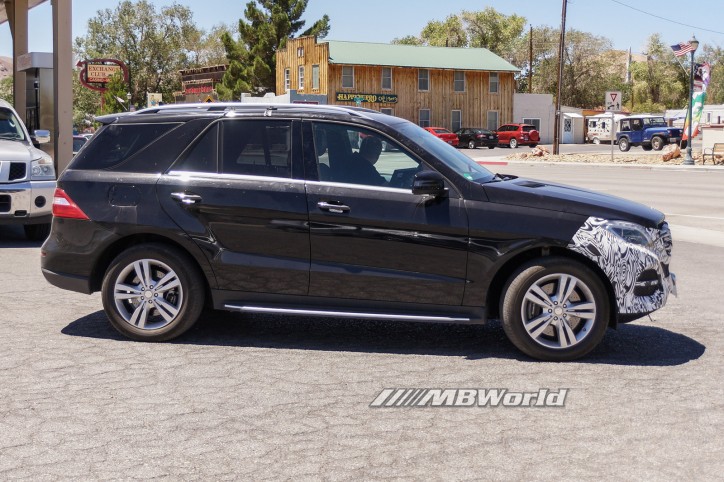 A spy photo of a facelifted Mercedes ML-Class, which is expected to make its debut sometime this year.

Spy photos of a facelifted Mercedes ML-Class have been circulating the Internet recently, which display a few tweaks in the design of the vehicle. According to Automobile magazine’s blog, two new engines will also be introduced with the ML range this year. The source claimed that the new powertrains will both feature biturbo and smaller displacements, plus improved fuel efficiency.

First in line is the 2015 Mercedes ML 400 4MATIC. This replaces the outgoing ML 550 equipped with 402 hp V8 engine giving off a displacement of 4.7 liters and fuel efficiency ratings of 14 mpg on city drive, 19 mpg on the highway, and 16 mpg combined.

The ML 400 has a 3.0-liter biturbo V6 engine with less power than it predecessor, having only 329 hp and 354 lb-ft of torque. However, its fuel efficiency rating has been significantly improved with 18 mpg on city drive, 22 mpg on the highway, and 20 mpg combined.

Second is the 2015 Mercedes ML 250 BlueTEC, which replaces the ML 350 BlueTEC. Compared to its predecessor, the new variant has less power with only 200 hp and 369 lb-ft of torque from its 2.1-liter biturbo inline-four engine. It should be noted that the ML 350 has 240 hp and 455 lb-ft of torque coming from its V6 engine. But then again, the report claimed that the  fuel efficiency of its upcoming replacement has been greatly enhanced.

Although no official EPA fuel economy ratings have been released yet for the ML 250, it is expected to go 30 miles for every gallon on a long drive at the highway.