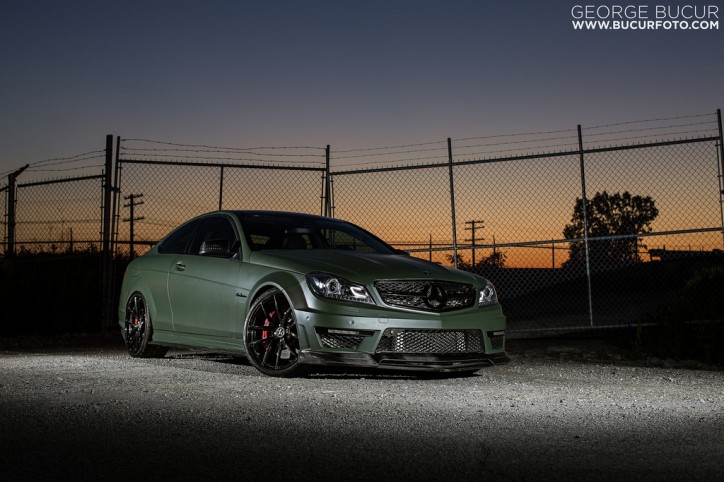 Earlier this year, Toronto’s Skyline Speed Tuning completed its custom-built Mercedes C63 AMG Coupe. The car featured a Stage III modification, which means it had to be built from the ground up.

Parts from body all the way to the engine of the car were re-engineered to transform the vehicle into a total beast on the road. Among the components fitted into the car were a fully-built motor and transmission, carbon fiber armor, and a tough-looking military-green finish. It was also equipped with a set of Vellano-forged wheels to further enhance the car’s aura.

Overall, the Mercedes C63 AMG AMG was not only given an intimidating appeal, but under its hood sat an explosive engine fit for racing and not for the faint of heart.

George Bucur, a car photographer, recently shared his artistic shots of the Stage III custom-built Mercedes C63 AMG via a forum in MBWorld. Check out his work below:

Although no engine specs were provided by the source, it is assumed that its output is more than the what the 6.2-liter eight-cylinder V8 engine of the C63 AMG is capable of. With a stage III tuning, its power could be somewhere above 507 hp or around 800 hp, which is close to the treatment made by Mcchip-Dkr to another C63 AMG.

With a power like that, the car is certainly out of place in the streets of Toronto. Handing it to someone with an unquenchable thirst or absolute need for speed, could easily spell disaster to other motorists and pedestrians along its wake.