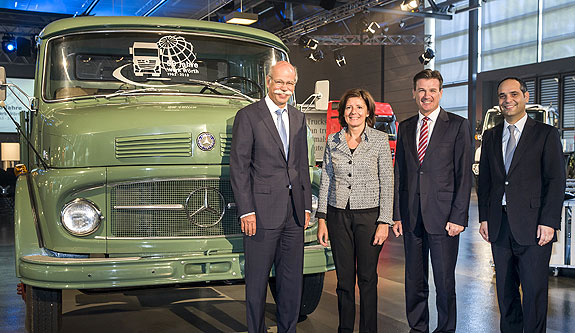 Guess who just turned 50? In a huge anniversary gathering, Mercedes-Benz Trucks celebrated the 50th year of production in its Wörth plant, to commemorate the first units straight out of the assembly line on October 1st back in 1963.

Around 300 guests were present in the celebration. The guests included Mercedes-Benz personnel as well as some figures within the industry as well as in politics. You have Dr Dieter Zetsche, of course, in his capacity as Daimler CEO. Daimler Trucks and Daimler Buses chief Dr Wolfgang Bernhard was also on hand, as was Mercedes-Benz Trucks head Stefan Buchner.

Dr Zetsche talked about the ‘Spirit of Wörth’, which basically has three elements: innovation, pioneering, and also team spirit. That’s pretty lofty praise from the head honcho, but it’s all justified given the plant’s history and production capabilities. The 12,000-strong work force at the plant churns out around 470 units each day, in a combination spread out among the company’s truck models from Actros to Zetros.

The Wörth plant, a 29 sq km complex with offices, production areas and a Customer Center, among others, has also been responsible for over 3.6 million units built over its 50 years of service, which only backs up its status as the biggest truck production facility in the whole world. With those credentials, there’s no doubt that the plant plays a huge role within Mercedes-Benz’s and Daimler’s global production network.

Dr Bernhard was also quick to sing the facility’s praises, saying that it is among the key pillars in the brand’s global strategy. This, he says, is also shown in the investments — over 1.3 billion euros — made in the plant over these past three years.

Investments have included initiatives to make the plant more environment-friendly through the use of sustainable equipment as well as green technologies. It even has direct power generation capability, with as much as 40% of the electricity and also 25% of heat  needed by the factory supplied on-site.