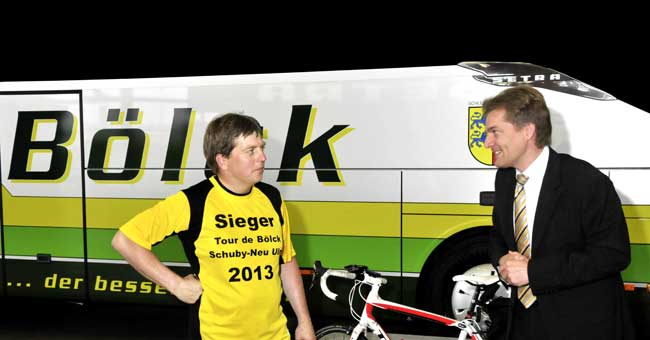 Mathias Bolck, who is a co-owner of the eponymous Schuby-based bus company, rode his bicycle from his hometown all the way to the Setra customer center in Neu-Ulm, covering a whopping 894 kilometers over 8 days in order to receive his brand-new Setra S 516 HD.

Bolck covered between 90 to 130 kilometers each day, and he went on for 8 days with just one rest day on top of that. During the final stretch, he was even forced to make a number of detours in order to avoid some floods.

Once he came into the customer center, he was greeted with applause and an ovation from the Setra personnel at the facility, including sales manager Heinz Friedrich. Also present at the hand-over was Bolck’s mother and brother.

Now, Bolck gets his company’s 15th touring coach. The company also operates some 20 Setra MultiClass 400 units. He rode the new S 516 HD back to Schleswig-Holstein, and even called back after a while and told Setra that the coach “runs great.” He added that he was “already delighted” with the new bus, and this was only after several hundred kilometers on the maiden trip.