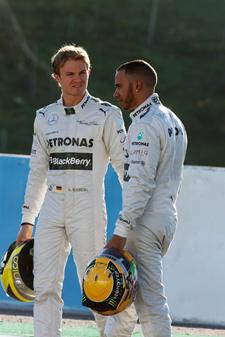 After completing a remarkable feat for the day, 145 laps to be exact, reporters from various news sources had a chance to get the thoughts of the 2008 F1 world champion.

However, Hamilton admitted that the speed needs improvement. He said that one crucial factor affecting the car is its lack of downforce. That is something that they are asking the people at the manufacturing plant to improve at the moment.