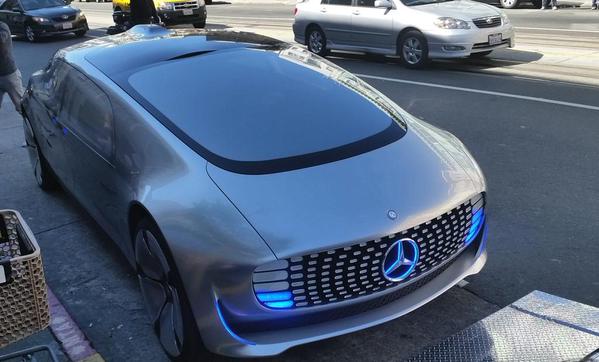 The Mercedes self driving car was seen parked in one of the busy areas of SF.

The Mercedes self driving concept car called F 015 Luxury in Motion was spotted in the flesh in one of the busy districts of San Francisco. The people who recognized the car, or were simply amazed by the gorgeous vehicle, started taking pictures of it and posted some of them through social media.

Check out the captured photos of the Mercedes self driving car here:

According to the source of the images, the photos were taken in California Street. There was no mention though about what it was doing there, but it seemed like it was just parked on the sidewalk.

Whether it was being driven manually or if it was in its self driving mode was not clear too. However, it must be really great to see it in its physical form right on the streets. It looks like it really did not change since it was unveiled.

It should be recalled that the F 015 Luxury in Motion made its debut in January of this year. It was showcased at the 2015 Consumer Electronics Show (CES) in Las Vegas.

The key highlight of the concept car is, of course, its autonomous driving feature. Then, its interior is also riddled with very advanced entertainment and navigational features. In addition, the architecture of its cabin even allows the passengers to face each other. The front seats, including the driver’s seat, can be rotated to let the driver interact with the rear occupants of the car while it is in auto-pilot.