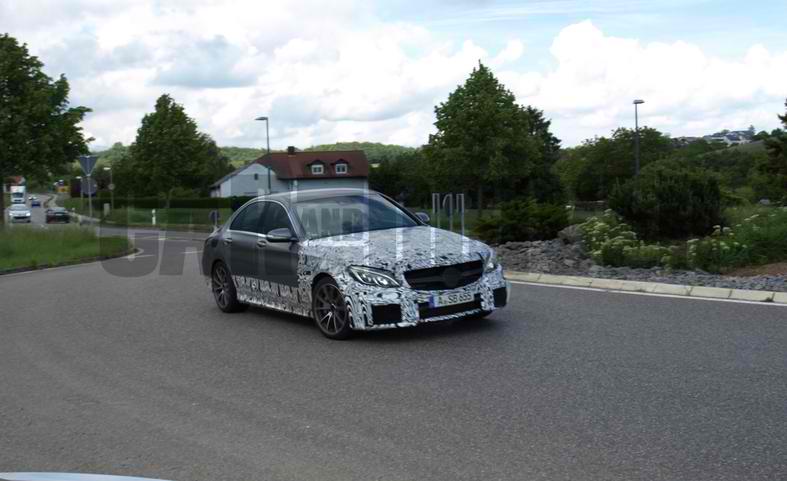 A camouflaged Mercedes-Benz, said to be the 2016 C63 AMG, was caught by one of Car and Driver’s spies recently while it was cruising down a street in Europe.

The spy photos displayed a 2016 Mercedes C63 AMG with a smaller package compared to its predecessor and the C400 4MATIC sedan. The car appeared to borrow a lot of the S63 AMG’s styling, particularly in its front air intakes, headlamps, rear diffuser and exhausts. Among the other features of the spied 2016 Mercedes C63 AMG were new slim-spoke wheels, spoiler at the trunk, bulky brake discs.

According to the source, the platform of the car is based on the latest W205 C-Class. It also uses much of the E-Class and S-Class sedan’s architecture. The initial releases of the vehicle will be carrying a rear-wheel drive, but a 4MATIC all-wheel drive model could come out soon after its launching.

The 2014 Mercedes C63 AMG is equipped with a 6.3-liter naturally-aspirated AMG V8 engine. However, the 2016 model is speculated by the report to have a biturbo 4.0-liter V8 engine. The new engine will probably raise the output of the car from 460 to 500 horsepower. Then, the power will be distributed through its seven-speed Speedshift automatic transmission utilizing a multi-plate clutch instead of a torque converter.

The 2016 Mercedes C63 AMG is being groomed to compete with the redesigned BMW M3 and M4, and Cadillac’s soon-to-be-launched ATS-V. It will likely make its debut during the first quarter of next year with a price more or less $60,000.