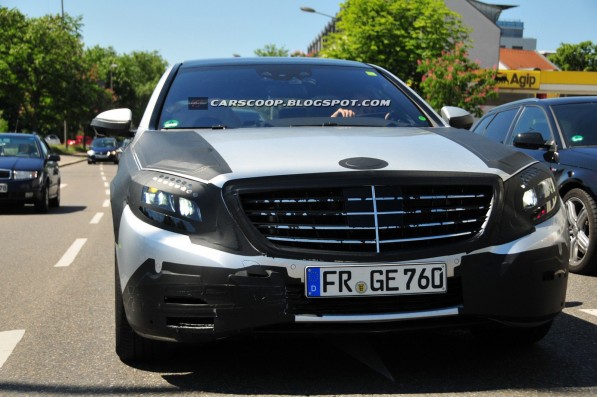 The 2014 model of Mercedes-Benz’s ‘special class’, the S-Class, has already been spotted in the wild, with some shrouds keeping us from seeing the full beauty of this new-generation luxury sedan. The frame keeps the same curves as the previous S-Class, although the front fascia gets a redesign. The grille gets wider and are flanked by the semi-wraparound headlamps.

The 2014 S-Class, codenamed W222, is set to reinvigorate the Mercedes-Benz lineup. Some rumors have it that the S-Class will have not 3 but 6 different models within the class. According to speculation, there’s bound to be a Pullman variant, a couple of convertibles, a coupe to take the place of the CL-Class, and the normal and long-wheelbase sedans.

In line with the luxury range, Mercedes-Benz seems to have equipped the interior of the 2014 S-Class well. The dash gets a TFT display of considerable size for ample viewing of instruments and infotainment features. While there are no details yet, expect this model to carry a suite of high-tech gadgetry inside to keep the occupants pampered and connected.

There should be a number of engine options for the 2014 S-Class, and there’s slated to be plug-in hybrid variants on top of the standard models. AMG should also introduce its souped-up version of this class sometime in the near future. For the meantime, enjoy these spy shots.