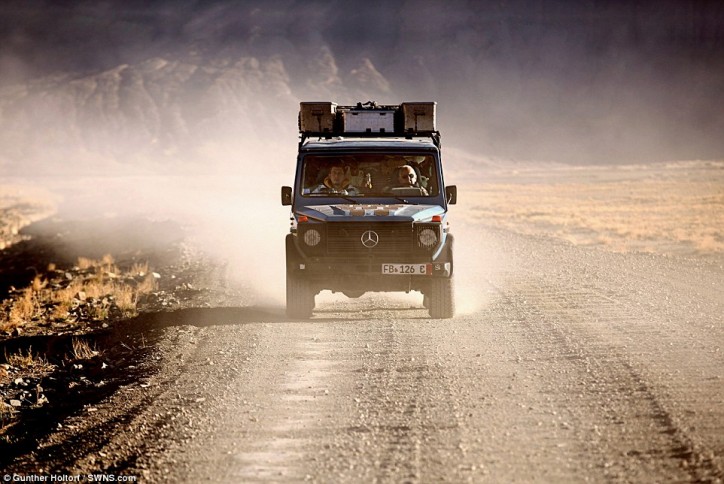 The epic journey of the Mercedes-Benz G-Class called “Otto” comes to a finish. (Photos via Mail Online)

Gunther Holtorf finally reached the end of his 24-year long trip using the same vehicle, that is his trusty old Mercedes-Benz 300GD with the nickname “Otto”. According to Mail Online, Otto traveled around 556,000 miles, including boarding 113 deep-sea ferries and staying in 41 ocean shipping containers.

The epic journey is a clear display of the resiliency of the Mercedes-Benz G-Class. Coupled with a driver with a strong determination, the vehicle is capable of conquering any kind of terrain, weather and other obstacles along the way as demonstrated by Holtorf.

Currently, Otto had the most country traveled than any other car in the world based from the source. The 4×4 went through 215 countries from Africa, North America, South America, Europe, Asia and Australia. Then, of the 556,000 mileage of the G-Class, an approximately 155,000 of it was driven off-road said the report. It should be noted that it traversed areas with temperatures as low as -27 degrees Celsius in Siberia up to +50 degrees Celsius in Alice Springs, Australia. Another amazing feat of the auto, which is worth mentioning, was when it went across the base camp of Mount Everest, which is 5,200 meters above sea level.

How It All Began

The legendary road trip of Holtorf began in 1990 with his late wife Christine. The original plan was only a tour in Africa. However, after much enjoyment in their first trip with their G-Class, which was named “Otto” by Christine, they pushed on to other continents.

The extraordinary adventures of Holtorf eventually caught the attention of Daimler. So, after his memorable journey, his ever-reliable Otto earned its place in the Mercedes-Benz Museum in Stuttgart.