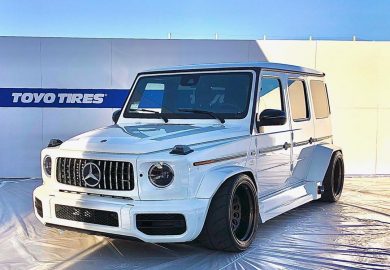 The 2019 SEMA Show is already happening in Las Vegas. The venue highlights the best and the worst things that you can do to your vehicle. Now, one of the autos that caught our attention in the event was the slammed down version of the Mercedes-AMG G63. The reason why would someone slam the G-Class is beyond me. That’s because they are taking away the very reason why the sport utility vehicle was made that way in the first place. One of the things that people like in the G-Class is the high-ground clearance that lets it tackle rough roads. The argument that the mod has something to do with… Continue Reading »

Mercedes-Benz recently debuted a new vehicle for the U.S. market at the SEMA Show 2014. The three-pointed star introduced the Mercedes Metris in the American soil during the event. The Mercedes Metris is the Americanized version of the Mercedes Vito, a commercial van that sits as a sub-variant of the Sprinter. According to Car and Driver, the vehicle will be sold in the U.S. by 2015. The source claimed the model is expected to use a 2.1-liter turbo-diesel four-cylinder as a standard with a rear-wheel drive configuration. An optional all-wheel drive specification is also foreseen. Although the Mercedes V-Class was not planned to be offered in the U.S., some of its… Continue Reading » 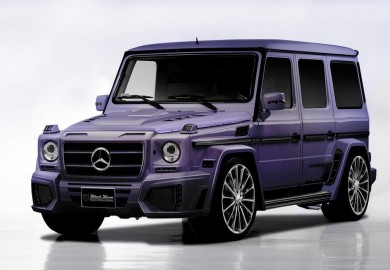 Seen at the recently concluded SEMA show was this wild-looking Mercedes-AMG G55, as interpreted by Japanese tuner Wald International. Featuring a ventilated hood, a new front grille, revised headlights, LED daytime running lights, a larger front bumper, and wider wheel arches, the brawny G55 was then given a purple-hued exterior. Thankfully, it’s only a wrap, so more conservative aficionados won’t have to moan about Wald destroying the car’s OEM finish. Predictably, a new set of alloy wheels was installed by Wald. The result is a weirdly aggressive-looking G-Class that looks just about ready to transform into an ally of Optimus Prime. As a show vehicle, it certainly is eye-catching and… Continue Reading »

Wald Shows Up At SEMA With An Orange CLS

A couple of weeks ago, we presented to you Wald’s rendition of the outgoing R230 Mercedes SL. At the ongoing SEMA show, Japanese tuner Wald has on its stand a radically-colored Mercedes with an aesthetic treatment similar to that on the R230 SL. As with the R230 Wald “Black Bison”, this special CLS features a revised front fascia, new skirts and vented fenders. The back end also features rear vents on the lower part of the fenders, a roof and deck spoiler, and a diffuser with oval-tipped staggered tailpipes peeking out from the diffuser area. Complementing the more aggressive aerodynamics are a set of black Forgiato wheels which provide a… Continue Reading »

After an intense, 45-day build and grueling 30 days of campaigning for votes from friends (like BenzInsider), family, and total strangers, Mercedes-Benz announced that RENNTECH has won the MBUSA GLK tuner build-off! The competition wasn’t easy, with BLVD Customs’ strong GLK “Urban Whip” roadster and Brabus’ slick “Widestar” each swapping positions with RENNTECH for the lead throughout. At the end of the day, however, Mercedes acknowledged that RENNTECH’s sweeping program of upgrades – which included extensive engine mods, software development, aerodynamic bodywork, suspension and brake upgrades, as well as converting the GLK to hybrid drive – pushed RENNTECH’s GLK 350 Spec.R Pike’s Peak rally racer “over the edge”.

The Mercedes-Benz GLK at SEMA 2008: A Legendary GLK

Regardless of your sport – snowboarding, wakeboarding, skateboarding or any other extreme discipline, the Rock Crawler from Legendary Motorcar Company (LMC) is designed to be the ultimate companion for those seeking an adrenaline fix. What started out as a go-anywhere brief focused on the off-road prowess of the Mercedes-Benz GLK, quickly turned into a do-anything reality when avid skateboarder Ryan Klutt, the 14 year-old son of LMC founder Peter Klutt first heard about the GLK tuner competition. Legendary Motorcar, which is more typically associated with race car fabrication and classic car restoration scene than with custom-tuning of road cars, then set about creating a vehicle that can not only get… Continue Reading »

Inspired by the winged, unlimited-class rally cars of the famed Pikes Peak Hill Climb, RENNtech set about creating a GLK that could master the pack and leave the rest chewing gravel. But, this wild GLK has a few surprises beneath its menacing exterior. Hybrid powertrains are generally associated with fuel efficiency and lower emissions. However, RENNtech has taken one more benefit of the hybrid principle to turn the GLK into a formidable performer. By combining an electric motor in parallel with the 3.5 litre V6 petrol engine, RENNtech has been able to capture the impressive torque that characterises electric motor drives, adding 54 Nm to enhance the GLK’s performance off-the-line… Continue Reading »