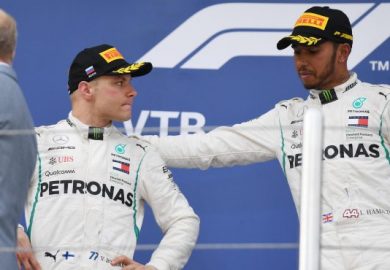 Lewis Hamilton grabs another victory while extending his lead in the Driver Standings. The win came after team orders were given. The conclusion of the Formula One Russian Grand Prix saw Hamilton crossing the chequered flag first followed by Bottas. Ferrari’s Sebastian Vettel emerged third while his teammate Kimi Raikkonen finished fourth. Both Red Bull drivers grabbed the fifth and sixth positions respectively with Max Verstappen and Daniel Ricciardo. The triumphant Hamilton increases the gap between him and Vettel by 50 points. Meanwhile, Bottas climbs in the standings at the third rank with 189 points, overtaking Raikkonen by 3 points. The big win of Hamilton can be attributed to Bottas…. Continue Reading » 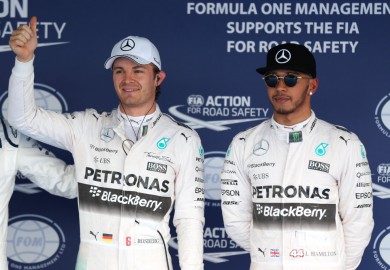 Nico Rosberg took pole position at the qualifying session for the 2015 Russian Grand Prix, besting his Mercedes teammate and championship forerunner Lewis Hamilton. This is the German’s third pole of the season, and the second straight. It is also Mercedes’ 11th front-row qualification this season. Ferrari drivers Sebastian Vettel and Kimi Raikkonen got P4 and P5, respectively, behind the Williams of Valtteri Bottas in P3. The Force India cars followed, as Nico Hulkenberg qualified into P6 and Sergio Perez into P7. To round out the top 10 qualifiers, we have the Lotus of Romain Grosjean in P8, the Toro Rosso of Max Verstappen in P9, and the Red Bull of Daniel… Continue Reading »