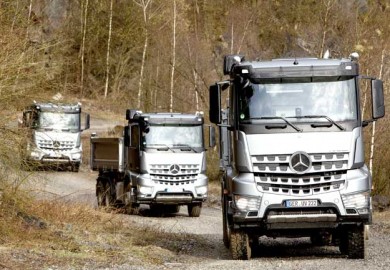 In a recent media article, Mercedes-Benz referred to its new Euro VI-compliant heavy-duty truck line as the ‘A-Team’, which actually started in 2011. After continued refinements and constant development, the three truck models, the Actros, Antos, and Arocs (pictured), are now fully compliant with the emissions standard. That’s something that Daimler and Mercedes-Benz Trucks is counting on to further grow its Europe-leading 23 percent market share in 2012. Whether the ‘A-Team’ refers to the fact that the names of the trucks all start with an ‘A’ or to the fictional group of soldiers of fortune featured in a Mr. T-bannered TV series in the mid-80’s and in a 2010 film… Continue Reading » 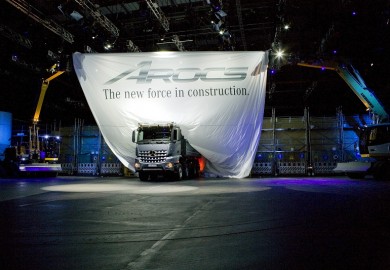 The Mercedes-Benz Arocs, the third model in the automaker’s heavy-duty construction vehicle lineup, just had its world premiere in Munich last January 28, rounding out a diverse complement of Euro VI trucks that already had the Actros and the Antos. The Arocs is set to be gradually introduced into the European market starting May of this year. Its role is heavy-duty construction, complemented well by the distribution transport Antos and the long hauler Actros. The three are built off a common platform, but developed with specific roles in mind in order to better suit the particular needs of prospective buyers from various segments and industries. Daimler Trucks’ expansive lineup that… Continue Reading »