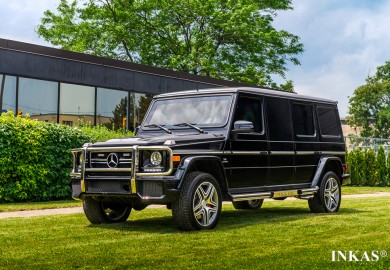 INKAS, a Canada-based armored-vehicle manufacturing company, recently introduced its first-of-a-kind fully-armored Mercedes-Benz G63 executive limousine. According to an email we received from Maria Tkacheva, the Communications Coordinator of the company, the vehicle features a 60-inch stretch, and it is designed to serve as a fully-functional executive mobile office. The INKAS Mercedes-Benz G63 Limousine Can Withstand Rifle and Grenade Blasts The armor-plating of the stretched Mercedes-Benz G63 complies with the CEN 1063 Level B6 ballistic standards. That means it can withstand several shots from a 7.62mm or 308 Winchester FMJ ammunition. Then, its floor can protect its cabin against two DM51-type grenades detonated from the ground simultaneously. The roll-up windows of the vehicle… Continue Reading »