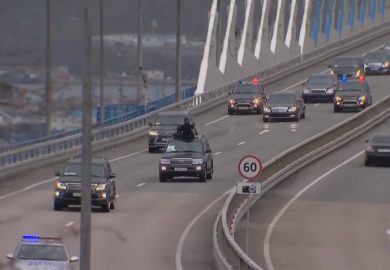 North Korean leader Kim Jong Un recently paid Russian President Vladimir Putin, and he did it with much flair riding a Mercedes-Maybach S600 Pullman Guard armored limousine. The problem with this scenario though is that the exportation of luxury goods to North Korea is banned by the United Nations. Therefore, Daimler denied having a hand in the dictator’s acquisition of one of their prized vehicles. “Our company has had no business connections with North Korea for far more than 15 years now and strictly complies with E.U. and U.S. embargoes,” Daimler spokeswoman Silke Mockert wrote in a statement sent to Associated Press. “To prevent deliveries to North Korea and to… Continue Reading »