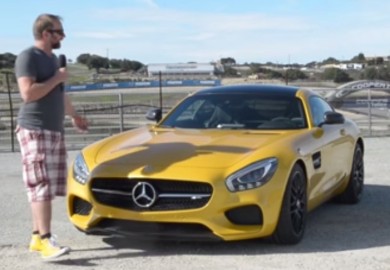 It seems anyone who has driven the Mercedes-AMG GT has a lot of good things to say about the car. Well, for a sports car hyped as a rival to the Porsche 911 and successor to the Mercedes SLS AMG GT, it better be great right? Although it is hard to beat Chris Harris in his car reviews, particularly that of the Mercedes-AMG GT, we would like to feature another video from a different perspective. The video you are about to see was from the hosts of the German automotive blog Ausfahrt.tv. Although the test drive of the car didn’t involve breathtaking maneuvers in corners or burning AMG tires in Laguna… Continue Reading »

Nintendo’s earnings continue to decline after losing a lot of their market share in the console wars. So, in an attempt to boost their standings, the company announced that it will be opening its doors to “new licensing opportunities”. The plan is to integrate famous brands with their iconic characters. The first on Nintendo’s list is Mercedes-Benz. According to Forbes, Nintendo revealed that it will be partnering with the famous German automaker to promote its GLA crossover. The deal allows the new Mercedes GLA to be featured in Mario Kart 8 as a part of its free downloadable content (DLC) in Japan. Then, Super Mario will be making special appearances in the commercials… Continue Reading »