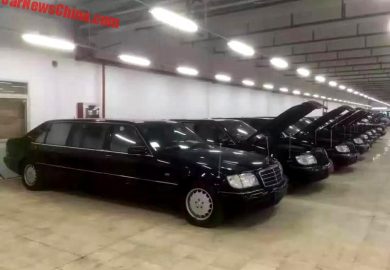 A good number of government officials typically have a penchant for the Mercedes-Benz S-Class limousine, particularly the Pullman model. The style and elegance of the W140 variant of the S-Class is one specific model that has drawn the attention of many government officials, who normally want to keep it as long as they can. The Bureau of Foreign Affairs of Shanghai has been using the S-Class Pullman until the latter part of 2014, and it appears it has remodeled a fleet of eleven units recently, as shown on a report from autoevolution.com. The Mercedes-Benz and model designations on the lid of the trunk of the vehicles were changed into Dynasty… Continue Reading »