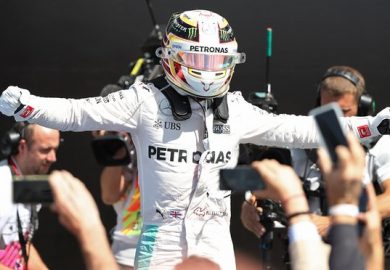 Lewis Hamilton displayed fine form in his home race Sunday, taking his third-straight British Grand Prix victory over his teammate Nico Rosberg and thus shaving more points off the deficit in championship points. The win drove wild some 135,000 fans who were on hand at Silverstone. Rosberg’s lead in the drivers’ standings has now been cut to a mere point, after an investigation for radio correspondence between him and the team led stewards to slap Rosberg with a 10-second time penalty. With five laps left, Rosberg encountered gearbox problems that had him stuck in seventh gear, and stewards are currently checking to see if the amount of information exchanged exceeded the maximum allowable… Continue Reading » 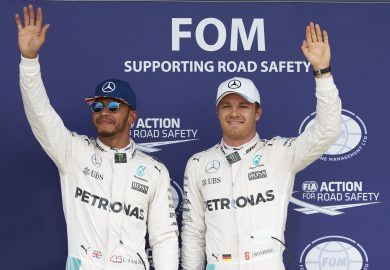 Add one more Mercedes front-row qualification to this year’s list. Lewis Hamilton drove a superb qualifying at the British Grand Prix as he edged out Mercedes teammate Nico Rosberg for pole position. Hamilton posted a time of 1:29.287, around a third of a second better than Rosberg’s, for his third-straight pole and his sixth overall this season. It is the 55th pole of his career, and his fourth at Silverstone. Rosberg also escaped being slapped a penalty after stewards cleared him of any fault after he drove too slowly at one point during qualifying. This allows Mercedes to keep its fifth front-row lockout of the season. Hamilton was especially appreciative of the… Continue Reading » 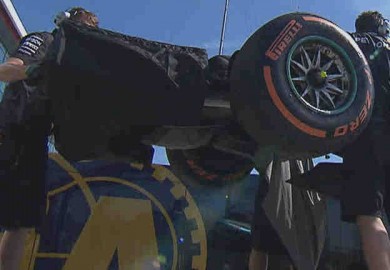 Officials in Formula One called the attention of Mercedes-AMG Petronas due to its action during the first practice for the British Grand Prix. The reprimand stemmed from the cover placed at the rear of Nico Rosberg’s race car while it was being returned to the garage following gearbox issues. According to the interview of Sky Sports with Jo Bauer, the FIA’s technical delegate, the act was in violation of the Article 27.4 of the Sporting Regulations. The specific provisions states: During the entire event, no screen, cover or other obstruction which in any way obscures any part of a car will be allowed at any time in the paddock,… Continue Reading »