In the end, the epic battle to decide who will be the ultimate Formula 1 driver for the 2014 season simply did not materialize. There would be no showdown, no gut-wrenching finish, as Nico Rosberg encountered technical problems at the 2014 Abu Dhabi Grand Prix, which meant that Mercedes teammate Lewis Hamilton had a clear path to victory. Hamilton took the race win and the driver’s championship, which was his to lose in the first place with a 17-point lead entering the event. This made Hamilton the first Mercedes team driver to claim an F1 title since Juan Manuel Fangio did so back in 1955. Hamilton also became the fourth British double-champion in history,… Continue Reading » 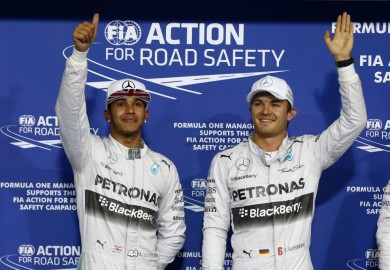 The battle for the 2014 drivers’ championship is going down the wire. Nico Rosberg took pole position in qualifying for the 2014 Abu Dhabi Grand Prix, the final race in the F1 season calendar that’s worth double the championship points. His Mercedes teammate Lewis Hamilton qualified into P2, making this the eighth straight front-row lockout by the Silver Arrows team and setting up a final battle that will determine the top driver this season. Apart from that, this result means that a Mercedes driver won the pole position in 18 out of the 19 races in the season, and the team has also secured the front row 12 times in total. On another note, Mercedes power… Continue Reading » 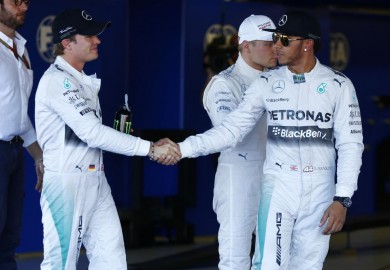 With Lewis Hamilton getting his 38th career pole position and Nico Rosberg taking P2 at the qualifying session for the 2014 Russian Grand Prix, Mercedes AMG Petronas has scored its fifth-straight front-row lockout. The pole is also the team’s 15th out of the 16 races so far this season. Running on a new track, both drivers expressed delight in their runs in practice as they got accustomed to the Sochi circuit. Qualifying proved to be harder for them, as they needed to adapt to different things especially given the smooth surface on the new track. “It’s an amazing feeling to come to this beautiful place and to race on this track,”… Continue Reading » 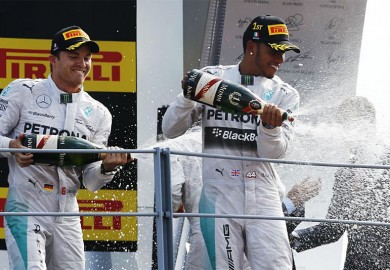 Lewis Hamilton raced well and had great pace throughout the race to win the 2014 Italian Grand Prix, ahead of teammate Nico Rosberg for yet another Mercedes one-two finish. That’s a nice recovery after retiring from the last race, as Hamilton now gets back some lost ground thanks to the points differential. Hamilton cuts Rosberg’s lead in the drivers’ standings by 7 points, and the two are now separated by 22 points – 238 for Rosberg, and 216 for Hamilton with six races left on the calendar. The win gives Hamilton 28 for his F1 career, surpassing Sir Jackie Stewart’s total and putting Hamilton at seventh all-time. In addition, this makes… Continue Reading » 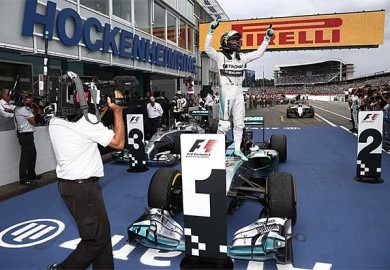 Nico Rosberg was true to form Sunday, as the Mercedes AMG Petronas F1 driver secured his first-ever home race win and his fourth overall this season by taking the victory at the Hockenheimring. Teammate Lewis Hamilton was able to climb up all the way from P20 to start the race and vaulted up to a stellar and well-deserved podium finish. Sandwiched between the two Mercedes drivers was the Williams of Valtteri Bottas, who took his third-straight podium finish and his second-straight number-two finish following a stellar British Grand Prix and his impressive P3 in Austria. Despite the very impressive race driven by Hamilton, the Brit was seemingly not impressed. After all, anything… Continue Reading » 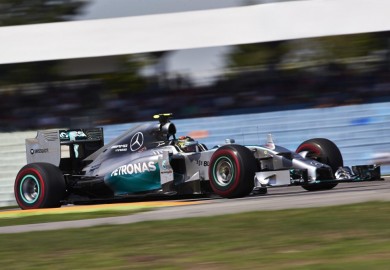 It was a bittersweet qualifying session for the Mercedes AMG Petronas F1 team at its home race, the German Grand Prix. Nico Rosberg was able to secure yet another pole position — his fifth of the season, and the team’s ninth overall out of ten races so far — while Lewis Hamilton had a brake disc failure during Q1, forcing him to end his session right there as the failure sent him spinning into a wall in Hockenheim. Hamilton’s time was good enough for Q2, but since he was not able to get a run in, he only qualifies at P16 on the grid. With Sauber’s Esteban Gutiérrez (P14 down to P17) getting docked three… Continue Reading » 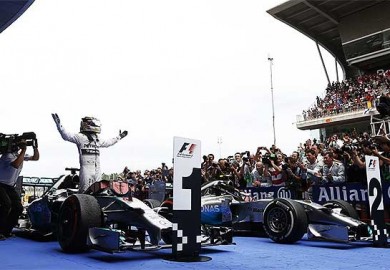 Another race, another Mercedes one-two finish, and the tension is mounting for the Mercedes AMG Petronas F1 teammates. Lewis Hamilton shook off the challenge from Nico Rosberg and held on to win the 2014 Spanish Grand Prix. As the race wound down to a close, the two teammates were silent right before the post-race interviews. With the win, Hamilton takes over the top spot in the drivers’ standings, with 100 points to Rosberg’s 97. Daniel Ricciardo of Red Bull Racing took the final podium spot, while his teammate and 3-time defending champion Sebastian Vettel jumped up from P15 at the start of the race all the way to fourth place by the time the… Continue Reading »