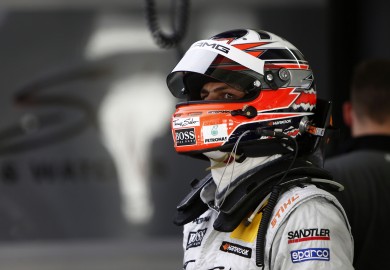 For all intents and purposes, the 2012 Deutsche Tourenwagen Masters season was Gary Paffett’s to lose. He had been leading all the way since the first race and was in good position to win it all at the final race despite watching Bruno Spengler chip away at his lead following dismal performances after the halftime break of the season. Well, Spengler was able to snatch the win—and the 2012 DTM driver’s championship as well—at Hockenheimring. DTM follows the FIA world championships points system, which awards 25 points to the winner and 18 points to the runner-up, then 15, 12, 10, 8, 6, 4, and 2 points to the rest of… Continue Reading »

Paffett to Start in P2 at DTM Finale 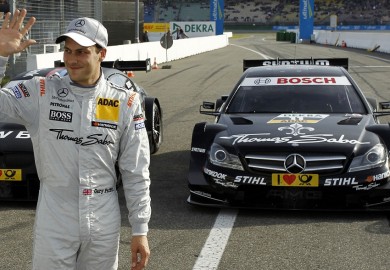 Mercedes-Benz driver Gary Paffett has been leading the drivers’ standings of the 2012 Deutsche Tourenwagen Masters season since the first race, and he isn’t about to let his title chances slip away now. The man behind the wheel of the THOMAS SABO Mercedes AMG C-Coupe managed to finish qualifying at Hockenheim in second place, allowing him to start in the front row of the final race of the season. “Pole position was my goal, but still, I’m on the front row of the grid and so feel very relaxed about the last race of the season tomorrow,” Paffett said. “Now I’m looking forward to an exciting and fair season finale…. Continue Reading »

Mercedes All Set for Climactic Battle at 2012 DTM Finale 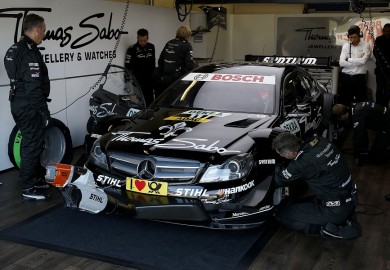 It all comes down to one race. This weekend, the winners of the 2012 Deutsche Tourenwagen Masters will finally be crowned, and fans should be treated to a tight race on Sunday. Gary Paffett is hoping to take his THOMAS SABO Mercedes AMG C-Coupe to victory, although it’s not going to be easy with BMW’s Bruno Spengler hot on his trail and fellow Mercedes driver Jamie Green also with a shot at the title. Here’s how the drivers’ championship standings are right now: Paffett is leading at 127 points, Spengler is very close at 124 points, and Green has 109 points. Audi drivers Mike Rockenfeller (85 points) and Mattias Ekstrom… Continue Reading » 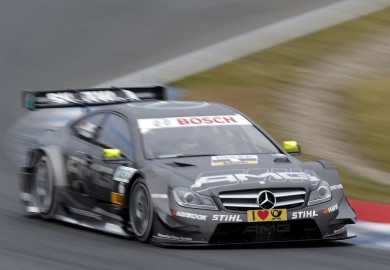 Gary Paffett and Jamie Green managed to get back on the podium with strong performances at the Motorsport Arena Oschersleben in Germany, placing second and third respectively to take their places in the podium. Meanwhile, BMW’s Bruno Spengler eked out his third victory of the season. While Paffett’s second-place finish is enough to stave off Spengler’s pursuit of the top spot in the drivers’ standings, he only leads by 11 points now. Paffett has 127 points to Spengler’s 116 with two races left in the season. Jamie Green is also a close third at 106 points. For the constructors’ title race, Mercedes-Benz is still comfortably ahead at 295 points to… Continue Reading »

Jamie Green reclaimed the number 2 spot in the drivers’ standings of the 2012 Deutsche Tourenwagen Masters season after finishing fourth at the Zandvoort race. With 93 points, Green overtook Bruno Spengler of BMW, who had 91 points after finishing sixth in the race. Gary Paffett still leads the drivers’ standings even despite an uninspiring 7th place finish. Race winner Edoardo Mortara of Audi moved up to fourth in the standings. While it’s been two consecutive disappointing outings for the Mercedes-Benz teams in DTM, starting from the Nurburgring race right after the midway break, the automaker still leads all of the three DTM categories: drivers, teams, and constructors. The Paffett-powered… Continue Reading »

Jamie Green was the best Mercedes-Benz team finisher on what was a bit of a lacklustre outing from the other drivers at the Nurburgring leg of the 2012 Deutsche Tourenwagen Masters season. Green finished fourth, and drivers’ championship leader Gary Paffett placed just sixth, although he still holds a comfortable lead over BMW’s Bruno Spengler, who won this race. Paffett has 103 points to Spengler’s 83, while Green is at third with 81. Mercedes’s HWA Team is still on top of the team standings with 127 points, while the automaker paces its two competitors with 237 points in the manufacturers’ standings. “That was a tough race in high temperatures and… Continue Reading »

It’s been a while since the sort-of All-Star break of the 2012 Deutsche Tourenwagen Masters season, but we’re primed for the resumption of DTM action this weekend. Mercedes-Benz will be looking to strengthen their hold on the top slot in the manufacturers’ standings, and we’ll be counting on the usual guys like Gary Paffett and Jamie Green to produce solid results to maintain their places atop the drivers’ standings. “The first half of the season was nearly perfect from my perspective: two wins, two podiums and a P4 finish after starting from last on the grid,” said Paffett, who accomplished a rare feat of getting the trifecta of pole position,… Continue Reading »