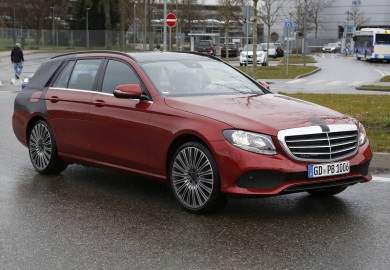 New spy photos of the upcoming Mercedes-Benz E-Class Estate were just revealed online. Images posted by GTSpirit show the E-Class variant with partial camouflage. According to the source, the car might come as a 2018 model. However, it added that it will be probably launched later this year. So, if that’s the case, it will most likely carry a 2017 year model instead. As seen in the photos, the spied E-Class Estate only had its rear and logo in the center front grille hidden. The black wraps cover much of the stuff starting from the C-pillar going to the rear hatch, taillights and bumper. The area with the camo means… Continue Reading » 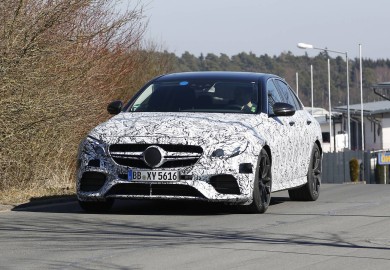 The 2018 Mercedes-AMG E63 Sedan and Estate made another appearance, as shown on a report through gtspirit.com. The official introduction of the standard E-Class Estate may be coming soon, but the German luxury vehicle manufacturer is currently working n the development of its AMG version. The Estate was seen when it went through testing together with the Sedan variant in Nurburgring, Germany. The Wagon and Estate variants are expected to feature the 4.0-liter twin turbo V8 engine, which is currently being used on the C63 AMG. The two models are also expected to have a power output of at least 500 HP. A dry sump lubrication system will be used… Continue Reading » 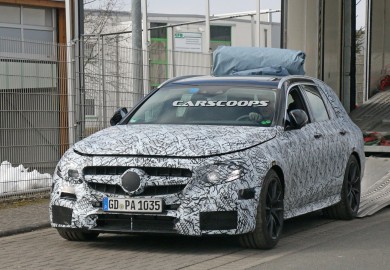 A new variant of the Mercedes-Benz E-Class was recently spotted. Based on the spy photos provided by Carscoops, the car is the estate version of the model. According to the source, the car is not just the standard model of the E-Class station wagon. Its features suggest that it is the 2017 Mercedes-AMG E63 Estate. The report said that the shots were taken while the camouflaged auto was being unloaded from a transport truck. Despite the heavy zebra camo of the vehicle, its features indicate it is using the new E-Class platform. Then its rear hatch gives it away as its estate version. Next, the bulges hint that it has… Continue Reading » 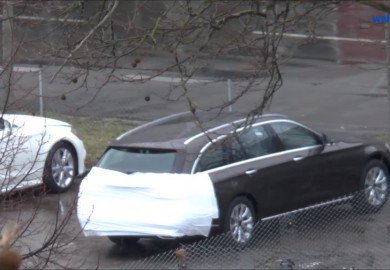 Fresh footage of the 2017 Mercedes-Benz E-Class Estate emerged recently showing near-production prototypes with minimal camouflage, as shown on a report from worldcarfans.com. The prototypes were parked beside their predecessors and only had camouflage on its rear end. The design of the new E-Class Estate is quite similar to the C-Class Estate. The camouflage on the rear of the luxury vehicle was ineffective in covering how the E-Class Estate will look like when it enters the market. The minimal differences in design may not sit well with some people who are expecting significant variations since these are models that come from different segments. The storage space of the outgoing E-Class… Continue Reading » 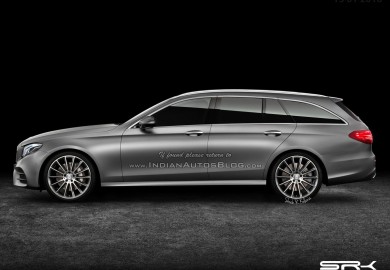 The 2017 Mercedes-Benz E-Class sedan was just unveiled at the 2016 North American International Auto Show at Detroit. Deliveries in Europe will start in April, based on Daimler. That means it won’t be long until the three-pointed star brand will unveil the other variants of the car. Recently, spy photos of a heavily camouflaged Mercedes prototype surfaced. Judging from the shape and visible features of the auto, it is speculated that it might be the Mercedes-Benz E-Class Estate. Getting some cues from the spy shots of the E-Class Estate and its sedan counterpart, the graphic artist of IndianAutosBlog immediately went to work on its rendering. The result is the beautiful image pictured above…. Continue Reading » 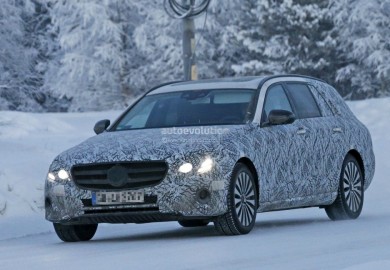 Even as the Mercedes-Benz E-Class Estate was spotted recently, rumors have started to emerge indicating that the German luxury vehicle manufacturer may enter the jacked-up wagon market, as shown on a report from autoevolution.com. The success of Volvo and Audi in the jacked-up wagon market may have given rise to the reports that Mercedes-Benz may be developing another version of the E-Class Estate. Reports have indicated that this second version may feature a higher ground clearance. Motoring Australia indicated that the second version may be called the All-Terrain, which may change once production starts. Its closest competitor in the market will be the Audi A6 Allroad. After the E-Class was… Continue Reading » 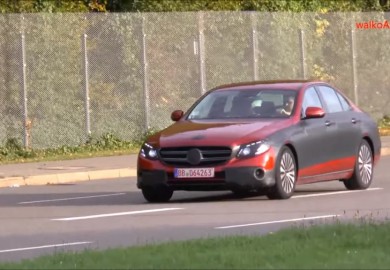 It seems the Mercedes-Benz E-Class Estate and Sedan were caught on camera again as they were tested in Germany, as shown on two videos posted on worldcarfans.com. The red Mercedes-Benz sedan has a lesser amount of camouflage compared to the white Mercedes-Benz wagon. Camouflage covered most of the body of the wagon with only the side mirror caps and roof remaining uncovered. The E-Class is expected to receive the latest design language of Mercedes-Benz through the W213 generation. Due to this, the new model will have a similar appearance as the C-Class and the S-Class. While buyers will ultimately decide whether this is good or not, a good number of… Continue Reading »