SEND US A TIP
G-Class, Tuner
0 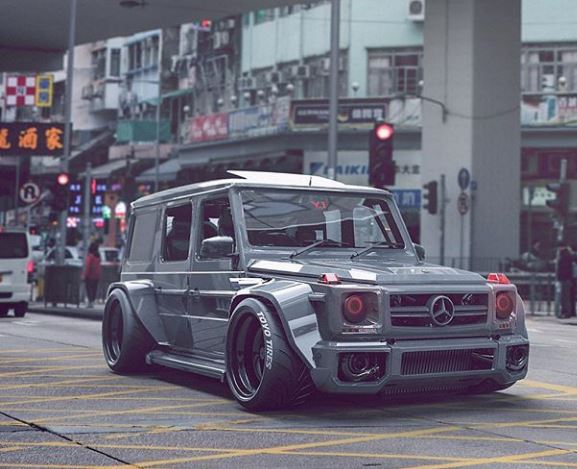 The new Mercedes-AMG G63 was just unveiled earlier. The latest model of the Gelandewagen features a new look and engine upgrade. However, there are still many auto enthusiasts who love to tinker with the outgoing model of the vehicle. One of them had the iconic sport utility vehicle slammed, giving it a very unusual setup.

The slammed Mercedes-AMG G63 shown in the picture above was made by digital artist Yasid Oozeear. The unit is a mere concept but the rendering gives us an idea that such configuration is possible.

The slammed Mercedes-AMG G63 retained its boxy shape and retro-looking body panels. However, the artist gave it new wheels with large lips while pushing its base closer to the ground. Extended fenders were also installed to support the enlarged wheels of the auto. In addition, its turbochargers have been relocated, which makes it possible for the vehicle to house larger turbo units.

“I never really accepted the Gwagon as a proper off-road, even though it can be fantastic. Perhaps it’s just the looks of it, makes me think of it as a defender wannabe. But that’s just me. Don’t e-kill me now,” the artist said on the Instagram post where the image originally appeared.

Most of us who saw the G-Class traversing rivers and dirt roads may not agree with Oozeear’s view but he is entitled to his own opinion anyway, so let’s just leave it there. Regardless, the slammed Mercedes-AMG G63 will surely stand out if fleshed out by one of the known Mercedes aftermarket tuners out there.