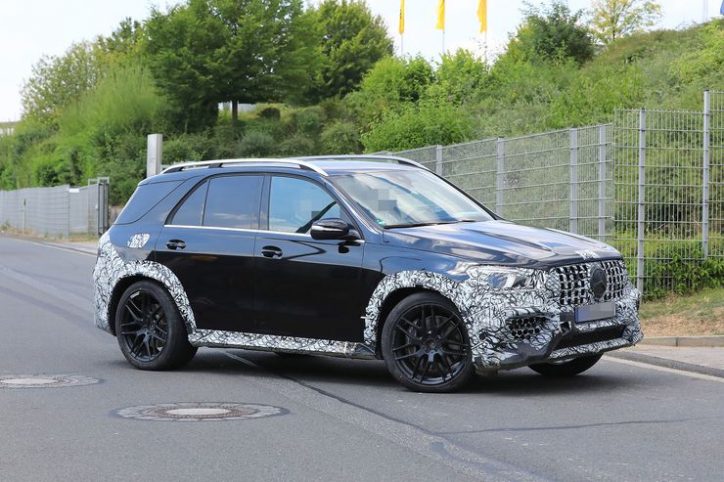 The latest spy shots of the Mercedes-AMG GLE 63 show the high-performance sport utility vehicle slowly shedding its camouflage, which exposes most of its exterior features. The lesser camo also indicates that the auto is nearing its official unveiling.

Various reports claim that the new Mercedes-Benz GLE model may debut in the early part of 2019 with a 2020 model year. However, the spy shots here suggest that the unveiling date might come earlier—possibly before 2018 ends. The AMG version shown above will probably be unveiled together with its standard Mercedes-Benz trims.

The new AMG GLE 63 appears with smoother surfaces compared with its predecessor. The creases on the side panels are also milder as opposed to the sharper body lines of its current model. Meanwhile, the covered areas could only mean that major changes will happen there.

The AMG GLE 63 will most likely have sportier and more aggressive bumpers and side sills than the outgoing model. As the norm, the front of the auto will certainly get vertical slats featuring what Mercedes calls the “Panamericana grille” styling similar to the old 50s Mercedes-Benz SL race cars and Mercedes-AMG GT. Going to the rear, we can see that the AMG GLE 63 is equipped with quadruple exhaust tips.

Though it is yet to be confirmed, we bet that the AMG GLE 63 will be equipped with a 4.0-liter biturbo V8 engine. The output of the SUV might lie somewhere in the 600 hp range.

Check out the new spy shots of the upcoming Mercedes-AMG GLE 63 in the gallery below: