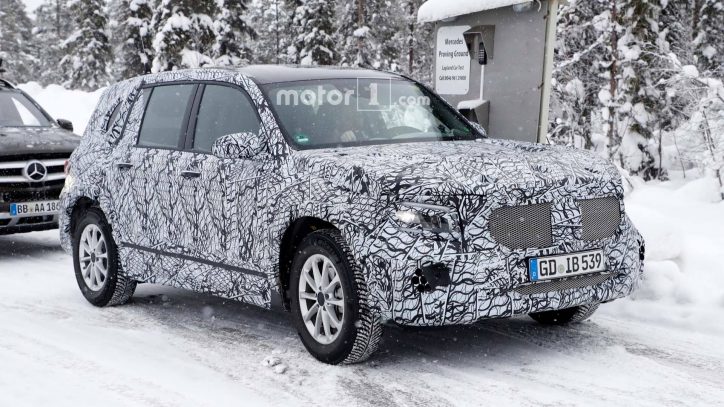 Last May, we have seen the new Mercedes-Benz GLB, the GLS and the EQC in a single spy video. Recently, a series of spy shots provided us a better look at the GLB crossover.

Will Utilize the MFA2 Platform

Based on the spy photos from Motor1, the upcoming GLB almost looks like the next-generation GLA. That should not come as a surprise because both are using the MFA2 platform of Mercedes. It should be noted that the same architecture is used by the coming A-Class and B-Class.

However, looking closely at both the GLB and the GLA would reveal that the former has a more utilitarian look. With that, the GLB is expected to have more legroom and cargo space than the GLA. The GLB will likely be able to accommodate five people in its cabin but sources say that the range will feature a trim increasing its capacity to seven people. A long-wheelbase version of the auto is a possibility, too.

The GLB might have the same selection of engines available in the upcoming A-Class, B-Class or GLA. Reports also claim that it could get a 1.33-liter engine with 134 hp or 2.0-liter power unit with 188 hp. The crossover is rumored to offer an AMG version as well, which would come with a 2.0-liter engine paired to a 48-volt electric motor using the EQ tech of Mercedes. The output of the high-performance model would probably be around 300 hp and 400 hp.

The GLB might debut later this year alongside the new A-Class. It will likely be introduced as a 2019 variant.