Lewis Hamilton Takes the Lead in the German GP 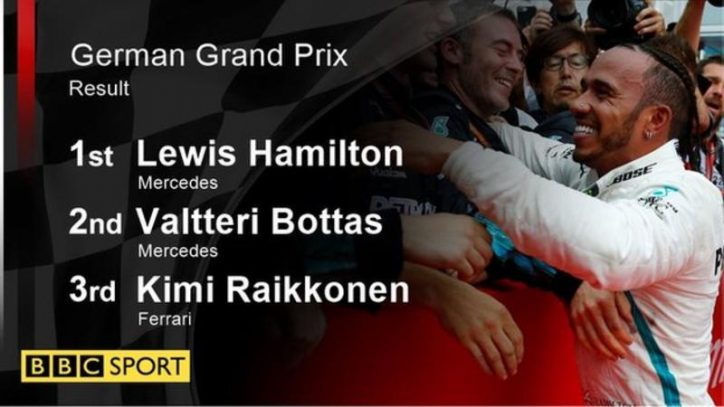 Mercedes AMG Petronas’ Lewis Hamilton just finished the Formula One German Grand Prix in an impressive fashion. The Briton is once again on top of the Drivers’ Standings after his rival Sebastian Vettel of Ferrari was taken out of the race.

Hamilton stormed the lead after a frustrating qualifying last Saturday. He went from the 14th place of the grid to the checkered flag in a dramatic race.

Vettel appeared to be gunning for the win again, but with only 15 laps remaining, his car suffered a crash. The German driver was poised to win the event when his teammate Kimi Raikkonen was given instructions over the radio to let him pass. However, he lost control of his car because of the slippery track caused by the sudden rain shower midway in the race, and he crashed into the barriers.

The mishap of Vettel squashed his chances to even score in the race. As a result, Hamilton reclaimed the lead in the standings, and he increased his gap with Vettel by 17 points.

Meanwhile, Mercedes is also back on top of the Constructors’ Standings. But the lead is only 8 points.

“I’ve never had a race like this,” said Hamilton in an interview with Sky Sports. He added that miracles do happen, and he stated “I’m so grateful, I kept pushing and kept believing and it happened. I really manifested my dream today.”

Way to go Hamilton! We hope that you will bag the title once more.

Hamilton was reprimanded for crossing the line between the pit entry and the track during the Car Safety period following Vettel’s crash. Mercedes explained that it was a result of a confusion after the driver was told to pit, only to call it off later.

After a close examination on the matter, the stewards decided that a reprimand is enough. Therefore, no changes have been made to the current standing of the Briton.