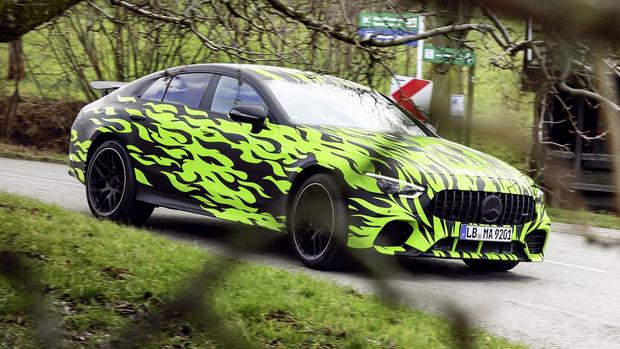 As the countdown draws near March 6, new spy shots of the Mercedes-AMG GT four-door once again surfaced online. The images show the car covered in black wrap adorned in yellow flame visuals, but they give us a closer look at the the unit and provide us an idea what to expect from it.

Check out the new spy shots of the four-door Mercedes-AMG GT sports car below:

Based on the latest press release of Mercedes-AMG, while their new four-door sports car derived its name, styling features and engine from the earlier two-door Mercedes-AMG GT models, it is more closely related to the Mercedes-Benz CLS coupe.

The Mercedes-AMG GT four-door does not lie on the bespoke transaxle platform of its two-door siblings. Instead, it utilizes a reworked variant of the platform used by the E-Class and CLS four-door Coupe.

The Mercedes-AMG GT four-door will benefit from the latest 4.0-liter biturbo V8 engine of the two-door AMG GT though. During the unveiling of the sports sedan’s concept version, AMG promised that its range-topping trim will have a hybrid power setup pairing its V8 engine with at least two electric motors. The output of the hybrid power system could reach more than 800 hp.

This coincides with AMG’s decision to ditch the V8 in their CLS models.

The Mercedes-AMG GT four-door is geared to go against the likes of Porsche Panamera, BMW 6-Series Gran Coupe, Maserati Quattroporte and  Audi A7 in the market.