Mercedes-Benz X-Class Given a Widebody Makeover by delta4x4 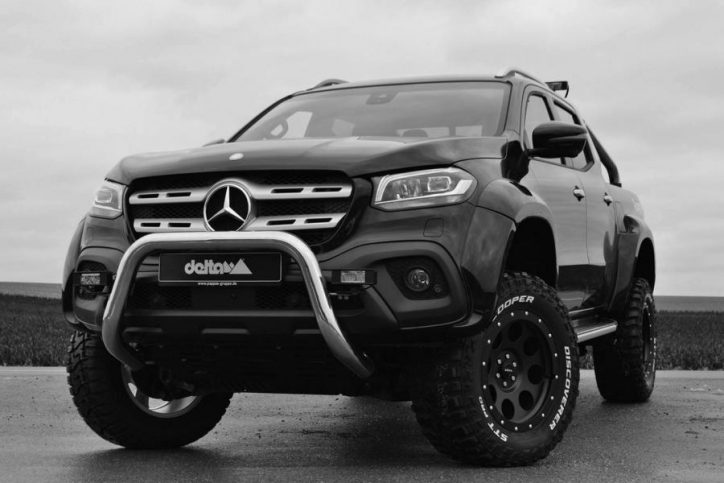 The Mercedes-Benz X-Class with custom body kit from delta4x4.

The Mercedes-Benz X-Class is one of the hottest releases of the three-pointed star brand right now that is not available in the U.S. Mercedes really made an impact with it in the premium pickup truck segment of the market.

So far, only a few aftermarket specialists have introduced custom parts for the X-Class. Recently, delta4x4 also introduced the magic they did on the pickup to give it a major visual overhaul.

Based on the video released by delta4x4 thru its Facebook page and a report from Tuningblog.Eu, among the significant changes they made to the X-Class include its steel bars in front of the radiator grille and bumpers, wider fender flares measuring 60-70 mm each, auxiliary lights, 100 mm bodylift with 40 mm shock absorbers,  and massive delta4x4 wheels wrapped in 305/60 R18 Cooper offroad tires.

So far, there are still a lot of things planned for the delta4x4 X-Class. The report said that there is a possible performance boost coming into the pickup via chip tuning, tuning box, compressor or turbo conversion. It will probably be complemented by a new sport exhaust system.

The current trims of the Mercedes-Benz X-Class are available in petrol inline-four turbo and V6 turbo diesel engines. The output of the models are from 161 hp up to 255 hp distributed by six-speed manual and seven-speed automatic transmission systems.

Here are some photos of the Mercedes-Benz X-Class with custom parts from delta4x4:

Check out the video of the customized Mercedes-Benz X-Class in the video below: