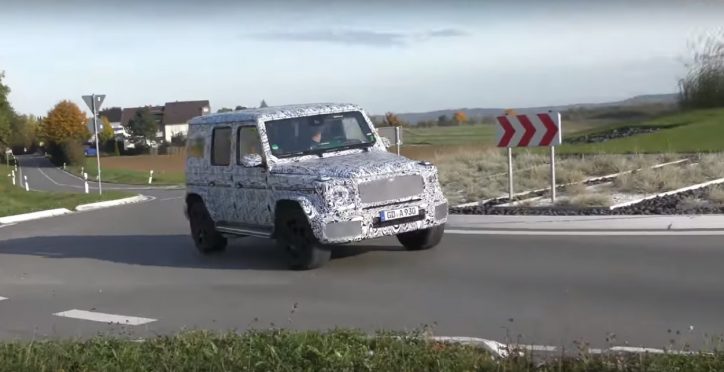 A video of the next-generation Mercedes-AMG G63 recently surfaced. The prototype of the upcoming high-performance G-Class appears covered in heavy camouflage. However, the slightly exposed radiator grille of the vehicle hints that it might be sporting the Panamericana design similar to all the current AMG models.

The 2017 Mercedes-AMG G63 and G65 still carry the traditional horizontal grille design running behind the three-pointed star logo. With the upgraded styling of the next-gen AMG model, it will be changed into the vertical slats that first came out in the Mercedes-AMG GT sports car. It should be noted too that the Mercedes-AMG GLC63 Coupe was the first SUV of Mercedes to feature such styling.

The source of the spy video also managed to get a closer shot of the auto. It is still hard to see what is inside the vehicle but there are reports that its digital cluster will be updated.

The next G63 is not expected to be unveiled until 2018. So its features are still a mystery to us. Then again, insiders claim that it might ditch its 5.5-liter biturbo V8 engine in favor of the 4.0-liter biturbo V8 power unit. On the other hand, there is a chance that its upcoming G65 sibling might keep its 6.0-liter biturbo V12 engine.

As seen in the earlier spy shots of the next-gen Mercedes-Benz G-Class, the auto will still retain many of its signature styling elements. Compared to the existing model though, the upcoming one looks a bit longer, wider and more spacious.

Hit the “Play” button below to watch the new video of the Mercedes-AMG G63 prototype: