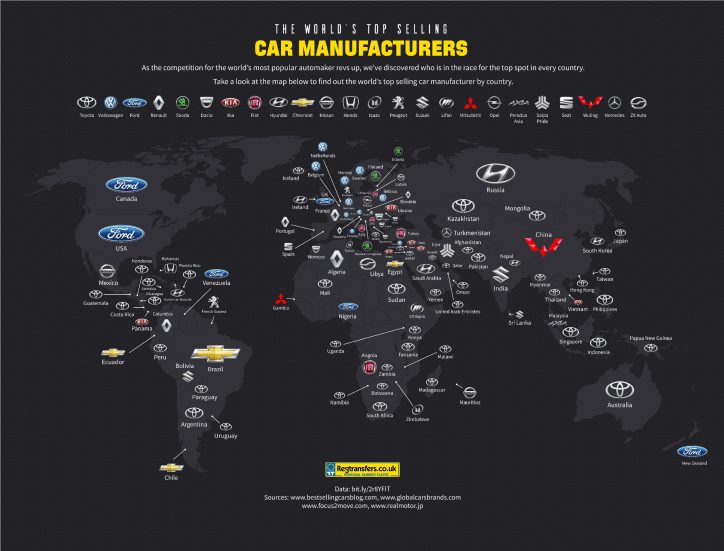 As of 2016, there were already 88.1 million vehicles being driven worldwide. The figure went up by 4.8% compared to its previous year. The numbers continue to grow as more demand pour in and more players in the car industry come in. So where does Mercedes-Benz rank among the world’s top-selling carmakers?

According to a study done by Regtransfers, Toyota remained as the best-seller when it comes to cars last year. The Japanese automotive manufacturer was the number one in 49 countries. The brand was followed by Volkswagen in terms of popularity in 14 countries. Third was Ford, which topped in 8 countries. Renault and Skoda led in 6 countries while Dacia and Fiat were tied with their leads in 5 countries. The map above illustrates the best-selling brands in major markets around the globe.

Mercedes may not have landed on the overall top 5 list but the carmaker surprisingly emerged as the best-seller in Turkmenistan, a country located in Central Asia. As an added note, Daimler also claimed that their premium brand had the most new car registrations in many countries. The list included the USA and Germany.

In 2016, Mercedes sold and delivered to customers a total of 2,083,888 vehicles globally. The numbers translate to a double-digit growth in sales at 11.3%. Daimler CEO Dieter Zetsche pointed out that the year was the most successful for the brand all throughout its history. Furthermore, it was the sixth consecutive record-breaking year of the automaker.

While Mercedes cars may be a dream for many people, it is not easy to come by because of its cost. After all, prestige, innovation and quality comes with a price. Therefore, it is one of the key reasons why it only dominates the premium segment of the market.